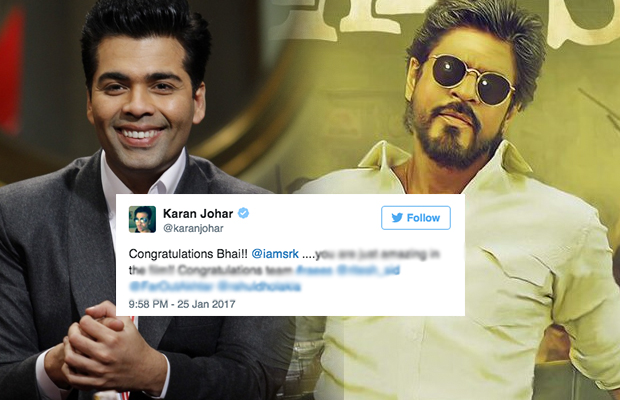 Shah Rukh Khan Starrer ‘Raees’ has finally landed on the silver screens today and it is getting an amazing response from the audiences. The movie has already grabbed a lot of attention and it seems as if the attention that the fans were giving was worth it.

And now ace director Karan Johar and the King Khan’s BFF has given his verdict about his film. Karan took to his Twitter account today after watching Raees and tweeted,

“And….#RAEES has been watched and LOVED! Full on paisa vasool SUPERHIT!!! @iamsrk iamsrk nails the part to perfection! He’s smouldering!!!”

The movie is set against the backdrop of prohibition in Gujarat and touches the way the alcohol industry crumbled and several illegal activities followed. Now that you have heard so many people including Karan praising the movie and SRK’s performance, have you booked your tickets?