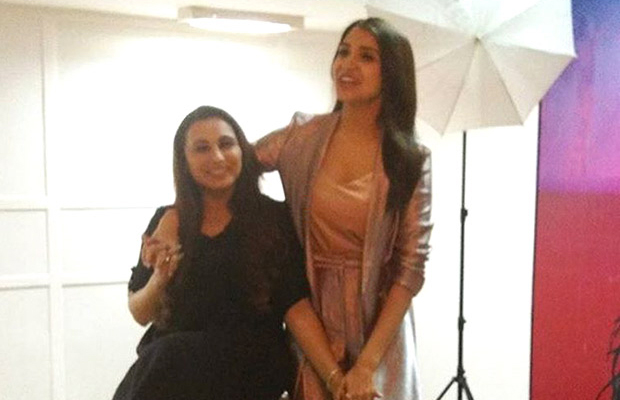 For all those who are waiting to see Rani Mukherji back on the big screen after a three-year hiatus in ‘Mardaani’ must be thrilled to know that she is all set to comeback on the silver screen. Rani will be seen coming back on sets, for the first time post motherhood, in ‘Hichki’ directed by Siddharth P. Malhotra and will be produced by Maneesh Sharma under the YRF banner.

Recently, Rani was doing a photoshoot where she looked stunning in a beautiful black ensemble by Bhumika & Jyoti Mukerji. Clicked alongside her was none other than Anushka Sharma, a find of YRF!

Does this mean a movie is in a pipeline helmed by these two gorgeous ladies?? But, alas, the answer is no! Sad indeed! The two YRF heroines came together for an interview with a leading media house and not a film.

Looking at the picture, seems like the two got along like house on fire and had a great time together.

This film, which is a story a friendly ghost and her love story, is set to release worldwide on March 24.