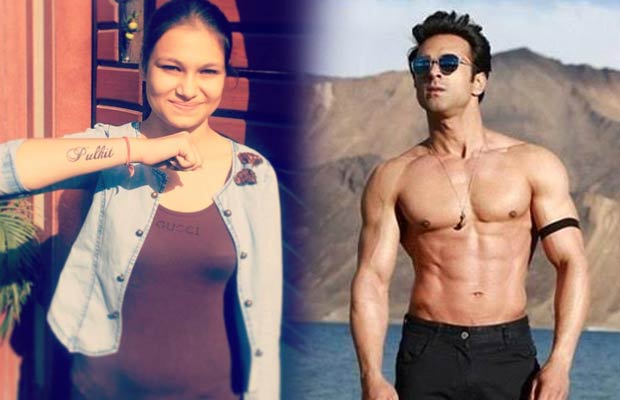 [tps_footer]Pulkit Samrat was recently left surprised by witnessing a special gesture by his girl fan.

The girl, an ardent admirer of Pulkit posted a picture of her having tattooed his name on her wrist.

The gesture has left Pulkit deeply touched and in complete awe of the love coming his way.

The girl in question, Simran travelled all the way from Jalandhar to Pulkit‘s residence in Delhi to show him her gesture of love.

Unfortunately, the actor was in Mumbai and couldn’t personally greet her.

Acknowledging her special gesture, Pulkit took to a photo sharing site and said, ”

Love comes in many forms n dis one is a dope level above dope! #DopestFanIvEverSeen @am_simran She came all the way from Jalandhar to meet me at my Delhi house. Unfortunately, I was in Mumbai while she was there. My bad Simran… I couldn’t meet you in person. Hope to see you sometime soon and wish you loads of luck n love in life! Rise High, PS. #DontInkYourSkinForMe# IWouldLoveToInkYourHeartThough”

Pulkit‘s lover boy persona is what gets girls weak in their knees.

Pulkit who has a had a huge girl fan following ever since his debut on TV has garnered much love on appearing on the big screen.

The actor who recently garnered a lot of appreciation for his film ‘Sanam Re‘ is currently going lean for his next.

The actor is prepping hard for his upcoming next ‘Junooniyat‘ and the second installment of ‘Fukrey‘.[/tps_footer]