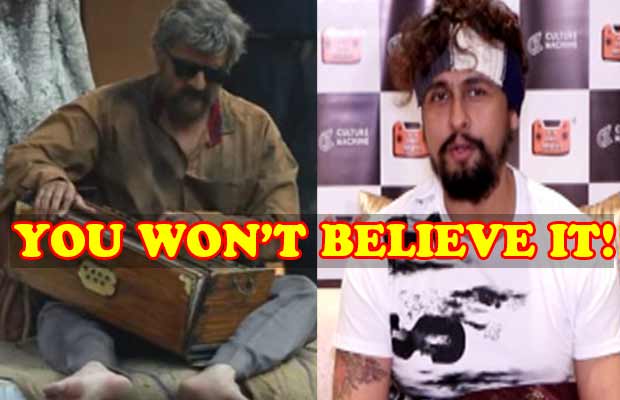 [tps_footer]Bollywood’s eternal king of melodious voice and charming looks Sonu Nigam has given beautiful songs to the music buffs like Mere Haath Mein, Ab Mujhe Raat Din, Chhoti Chhoti Raatein, Jaane Dil Mein, Chori Kiya Re Jiya, Sab Kuchh Bhula Diya, Tenu Leke, You Are My Sonia, Piyu Bole, Sau Dard, Suraj Hua Maddham, Dil Ne Yeh Kaha Hain Dil Se, Zoobi Doobi, Main Agar Kahoon, Abhi Mujh Mein Kahin, Kal Ho Naa Ho, and more. He is the most loved singer of our Bollywood and has received various honours even on the International platforms but Sonu chose to do a roadside show to entertain his listeners and changed his looks with prosthetic makeup due to which it was hard to recognize Sonu Nigam, a melodious singer who is cherished worldwide.

Sonu Nigam has received a wonderful response for his roadside act and this viral video has been viewed 3.5 million times already and going strong. But, do you know how many songs Sonu has sung while he was sitting under the scorching heat of the sun, dust and facing different reactions? Sonu said he sang at least 25 songs in three hours although in the viral video you will listen to two songs but Sonu continuously sang 25 songs. And, he surely understood the pain of those artists who get no recognition for their work and don’t even get a good opportunity and ultimately their talents dies inside them. We just wish every human on this planet, irrespective of their cast, sex, nationality, should be given equal opportunities and a good standard of living.

Sonu Nigam will launch his single Crazy Dil and his viral video is already generating a terrific response, we hope his single will benefit from this hype.