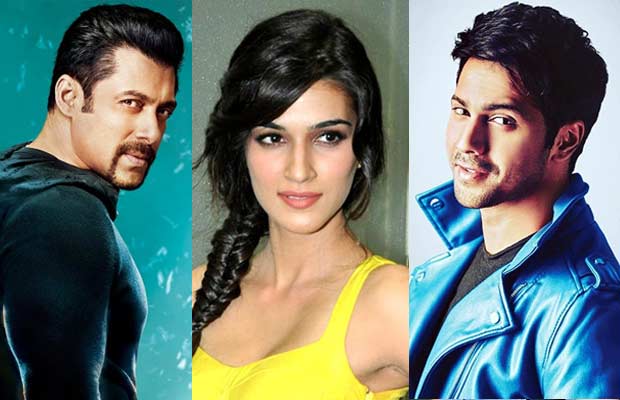 [tps_footer]”Heropanti”actress Kriti Sanon, currently being a big sensation in the industry where she has been considered by a lot of good film makers and actors to star opposite them. This, itself, is a big compliment to be the “talk of the B-Town” and to be popular among audiences too. Good going Kriti.

Judwaa 2 is actually and successfully creating a buzz about it’s story, Varun Dhawan replacing Salman Khan, Shraddha Kapoor being finalised to play one lead, her spokesperson denying it, saving this news to declare in the end of the year (Wowww !! What a surprise ! We already know. Bad luck !!), rumours of Alia Bhatt and Kriti Sanon to be Varun Dhawan‘s two leading ladies in the movie. But now, it’s already revealed that Shraddha Kapoor is going to be part of “Judwaa 2“. And still Alia Bhatt and Kriti Sanon and more lead actress are being considered to play the second lead role. Let’s see, who bags it ???

Kriti Sanon, had visited “Bigg Boss 9” reality show during the promotion of her movie “Dilwale“. Salman Khan, got pretty impressed with her and her acting skills and it didn’t take too long for Salman to talk to Atul Agnihotri and suggest Kriti Sanon for Kick 2. Salman Khan and Jacqueline Fernandez sizzled on screen in “Kick“. Now, we may get to see Kriti Sanon romancing Salman Khan after working with Shah Rukh Khan, although she was paired opposite Varun Dhawan as SRK was busy romancing his eternal on screen lady love Kajol (I hope, Singham Ajay Devgan is not reading this).

2016, seems to be an exciting year for Kriti Sanon. Hope you make the best choices girl and pleasantly surprise all your fans, loved ones and well wishers with Hits, back to back.[/tps_footer]