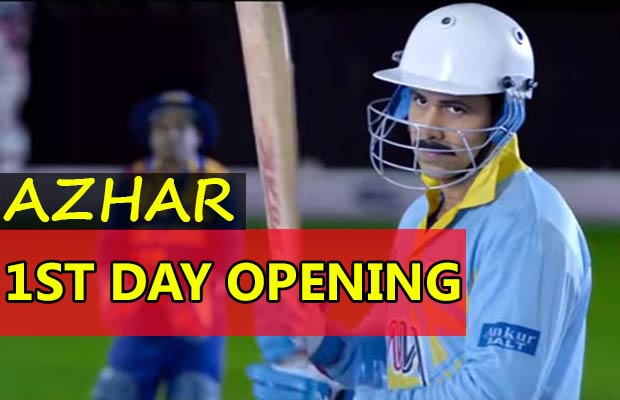 [tps_footer]Emraan Hashmi starrer Azhar, which is based on the life of former Indian cricketer Mohammad Azharuddin, has released today on May 13. The film with an ensemble cast including Nargis Fakhri, Prachi Desai and Lara Dutta, has been in talks for its promotions since a week. The film has received fair occupancy in the morning shows and has opened well in Gujarat but failed to open well in Mumbai and Delhi.

Compared to some of the films that have released this year, Emraan Hashmi’s Azhar has a pretty good opening. Overall Azhar has opened to average 25% across the country. Well, relying on the word of mouth, it needs to be seen if the film sustains and manages to grow in the evening and night shows.

Also, Emraan Hashmi‘s Azhar is better than his last 6-7 films but not better than ‘Jannat 2‘ or ‘Raaz 3‘. The film created massive buzz among the audience and the word of mouth can also work in its favour and is a huge factor to decide its fate. However, we wait to see if Azhar is all set to surpass good numbers on day 1 at the Box office.

Azhar is based on incidents and facts of the former Indian cricketer Mohammad Azharuddin, who ended up becoming the country’s most controversial sportsman due to allegations made on match fixing and his love affairs with actress Sangeeta Bijlani (played by Nargis Fakhri). Directed by Tony D’Souza, Azhar is produced by Shobha Kapoor, Ekta Kapoor & Sony Pictures Networks.[/tps_footer]