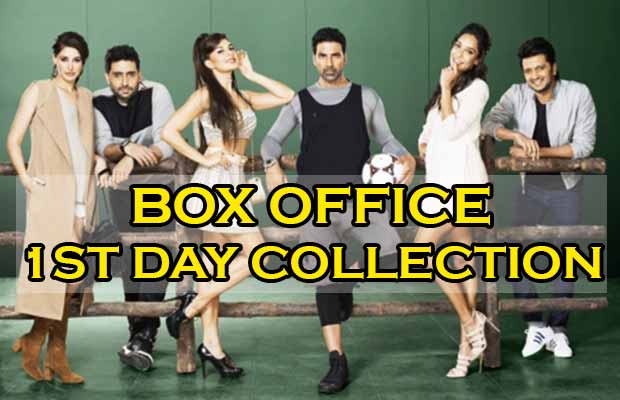 [tps_footer]Akshay Kumar, Abhishek Bachchan and Riteish Deshmukh starrer ‘Housefull 3‘, which got released in 3700 screens in India on June 3, has done well at the Box Office on Day 1 of its release. The comedy oriented film, which is receiving good response from the audiences, has made it to around Rs. 15.50 crore nett (155 million) at the box Office. Housefull 3 was very much promoted on various platforms and it seems this has helped the film to rake in huge moolah at the Box Office.

The film fared well in Gujarat with Rs. 2 crores approx collection (20 million) and Rajasthan with Rs.94 lakhs (9.4 million), and multiplexes in places like Jaipur, Ahmedabad and Surat have also put up very good numbers at the Box Office.  The film has managed to put up the highest opening day figures of the year in places like Gujarat and Rajasthan. The collections of the film showed good growth in the evening as family audiences had driven the theatres.

With an ensemble cast, the film has fared better overall at the multiplexes while single screens have underperformed. The opening day of the film is the second highest of the year after Shah Rukh Khan‘s ‘Fan‘. Also, even if the film does not show any growth on Saturday, it might have a chance to put big on Sunday being a family film. Well, the film can be possibly the most bankable franchise ever. The movie is all the more in the safe zone now.

The film is directed by Sajid–Farhad starring Abhishek Bachchan, Akshay Kumar, Riteish Deshmukh, Nargis Fakhri, Lisa Haydon and Jacqueline Fernandez in lead roles. Being a comic genre, the film might break many records of this year.[/tps_footer]