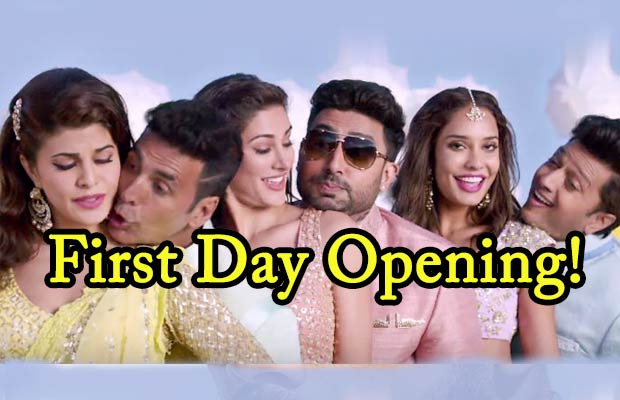 [tps_footer]Akshay Kumar, Abhishek Bachchan and Riteish Deshmukh starrer ‘Housefull 3‘ has released today at the Box Office. The film opened to a very decent opening and has saw occupancy of 35% during the morning shows at both multiplexes and single screens. Probably, the film is the third best opening of the year in terms of occupancy after ‘Fan‘ and ‘Baaghi‘.

The star casts of the film have managed to take the film with a good start at the Box office. With a good opening at the Box Office, ‘Housefull 3‘ is expected to show good growth during the weekends. Also, being a family film, the expectations from the film are very much high. Now it remains to see what magic the film creates in terms of reviews as well as collections.

The film is directed by Sajid–Farhad starring Abhishek Bachchan, Akshay Kumar, Riteish Deshmukh, Nargis Fakhri, Lisa Haydon and Jacqueline Fernandez in lead roles. Being a comic genre, the film might break many records of this year.

Now that ‘Housefull 3‘ has recorded 3rd best opening of the year in terms of occupancy, here are top 5 openings of the year. Shah Rukh Khan’s ‘Fan‘ had taken to 42.5% opening while Tiger Shroff’s ‘Baaghi‘ is second with 37.5% opening. Akshay Kumar has beat his last film Airlift with ‘Housefull 3‘ by bringing it to top 3. As SRK’s ‘Fan‘ released on a partial holiday, it remains as the top opening of the year.[/tps_footer]