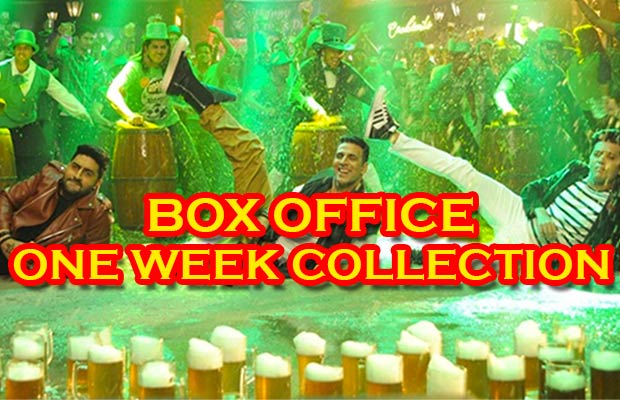 [tps_footer]‘Housefull 3’ opened on a good note at the box office. The multi-starrer film which is the third installment to the series of ‘Housefull’ garnered decent amount of audience at the screens. The film stars actors Akshay Kumar, Abhishek Bachchan, Riteish Deshmukh, Jacqueline Fernandez, Lisa Haydon and Nargis Fakhri in lead roles.

The film is an out and out comedy one like its prequels. The movie received above average reviews from the critics but some also criticized it for its non-sensible plot. However, even after all the glitches the film has successfully crossed its first week at the box office. Leaving all the films behind, ‘Housefull 3′ has now made a record for being the highest first week earner of the year 2016.

The hilarious movie earned Rs. 80 crore net approx (Rs 800 Million). in its first week which is the highest until now. Akshay Kumar starrer movie did a very good business on the weekend and also attracted many viewers on the weekdays. The genre of the movie further increased the number of watchers which proved beneficial for its collections.

‘Housefull 3’ did a commendable business in the areas of Delhi, Rajasthan and Gujarat. Additionally, due to lack of severe competition from any other film, this multi- starrer still has a good chance of increasing its collections.

The controversial state of ‘Udta Punjab’ might work in ‘Housefull 3’s favor. With no other big film releasing immediately, the comedy film still can garner more collections.[/tps_footer]