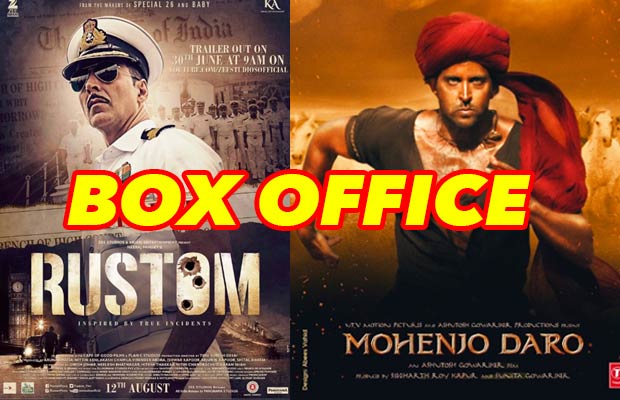 [tps_footer]‘Rustom’ and ‘Mohenjo Daro’ are now witnessing a deep battle at the box office. Both the films were equally awaited and both were top notch in their promotional activities too. After a long wait, finally, both these films have released. The initial verdict states that ‘Rustom’ has raced above ‘Mohenjo Daro’.

The film featuring Akshay and Ileana in main leads was opened in 2300 screens whereas Hrithik and Pooja’s ‘Mohenjo Daro’ was opened in 2500 screens. ‘Rustom’ has entered in the top three spots with its amazing opening.

The twist in the tale is that Hrithik Roshan’s film has fared amazingly well in the single screens which might affect the Akshay starrer. The multiplex crowds are opting for ‘Rustom’. The principle markets of Mumbai, Delhi, UP and East Punjab have recorded a good collection for the Akshay Kumar film. Nevertheless, ‘Mohenjo Daro’ is a crowd puller in the south and is also making bigger collections in the areas of Nizam, Tamil Nadu, and Kerala.

Currently, both the films are on par with each other with almost similar crowds at different sectors though. It will be interesting to see which movie gains more collections! The subject of the film ‘Rustom’ is more metropolitan as it is based on the Nanavati case whereas ‘Mohenjo Daro’ is historic in nature based on the Indus Valley Civilization. The varied plots also have carved different target audiences.