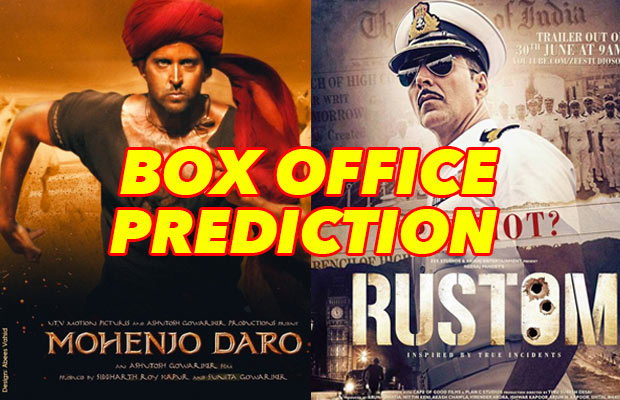 [tps_footer]The tinsel town will witness another big box office battle with films ‘Rustom’ and ‘Mohenjo Daro’. ‘Rustom’ starring Akshay Kumar in the main lead is much awaited by the masses for its curiosity filled concept. The movie stars actors Akshay Kumar, Ileana D’Cruz and Esha Gupta in lead roles. Coming to ‘Mohenjo Daro’, the movie is going fairly good in terms of promotions. The movie is historic and stars Hrithik Roshan and new entrant Pooja Hegde in lead roles.

Hrithik has had better openings lately because his films have released on holidays. Roshan’s films ‘Bang Bang’ and ‘Agneepath’ were holiday releases and gained a good opening.

Akshay Kumar has had limited holiday releases. His film ‘Singh Is Bling’ released on a national holiday and earned Rs.16.75 crore net approx. on the opening day. Both the films ‘Mohenjo Daro’ and ‘Rustom’ are equal in terms of popularity. Their collections will be equal on the opening day or similar.

Reviews, recall value and target audience, all these factors will also affect the two films in a big way. Now, which film will gain a good start at the box office is yet to be seen. ‘Rustom’ and ‘Mohenjo Daro’ will release on August 12th, 2016.