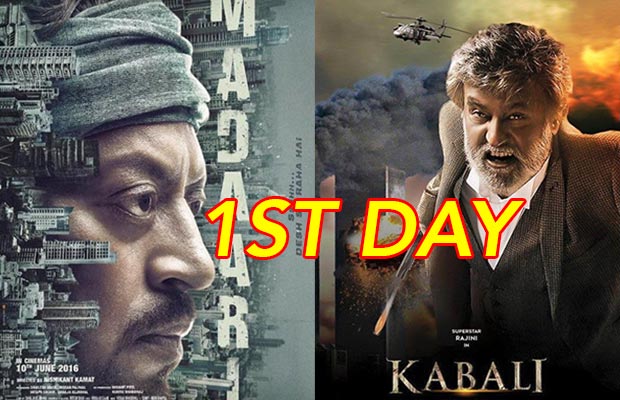 [tps_footer]‘Kabali’ and ‘Madaari’ have surpassed their first day at the box office. Irrfan Khan starrer film ‘Madaari’ is applauded for its meaningful concept and performance. The film is directed by Nishikant Kamat and depicts the working of the system and its people. ‘Madaari’ also has an emotional side to it. The movie is a thought-provoking one with a message.

Rajinikanth’s ‘Kabali’, on the other hand, was one of the most awaited films of the year. The movie for the presence of Rajinikanth was already labeled as a blockbuster. The massive promotions and marketing strategies were fruitful for the hype. The film is already a house full in most of the circuits.

The Hindi version of the film ‘Kabali’ is not that extraordinary in its first day collections at the box office. The collection of the film in the Hindi version is Rs.3 crore net approx. Most South Indian films have a limited crowd for Hindi speaking belts.  ‘Baahubali’ until now has gained the biggest opening in the Hindi speaking belts with Rs. 4.75 crore net approx. on its first day.

‘Kabali’ has done a tremendous business in the Southern belts; the movie is already marching for racing past the collections of ‘Baahubali’.

Coming to Irrfan Khan’s serious film ‘Madaari’, the film earned the collection of Rs.1.75 crore net approx. The movie was already assumed as a serious one. ‘Madaari’ is an intense film which is not claimed for the masses. The film will see less collection in the coming days. The collections for the Irrfan starrer film are better in Delhi and East Punjab.