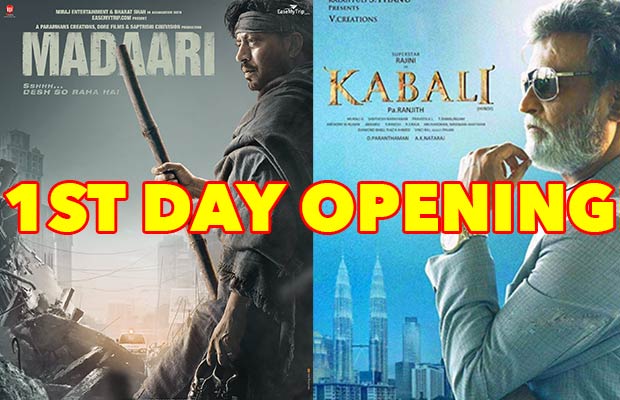 ‘Kabali’ and ‘Madaari’ are now battling at the box office. Rajinikanth starrer film ‘Kabali’ is one of the most hyped films of the year. The movie even before its release was counted as a blockbuster. The film will see Rajinikanth in the role of a don. The movie is an entertainment filled one with action and power packed dialogues.

On the other hand, Irrfan Khan’s ‘Madaari’ is a concept oriented film. The film is a thought-provoking one which talks about the system as a whole and the plight of citizens. Irrfan’s performance in the film is already receiving positive reviews. The movie, however, does have a mass appeal like ‘Kabali’. Due to lack of songs and fan-filled star cast, ‘Madaari’ might lose out on audiences.

The first day opening of the film ‘Kabali’ is 15% whereas opening for ‘Madaari’ is 7% to 8%. The opening of the Rajinikanth starrer is phenomenal in the South regions due to its massive target audience. The film has surprisingly also opened well in the Hindi speaking belts of Mumbai, Delhi, Pune, and Kolkata.

However, the Hindi version of ‘Kabali’ is quite lower in its opening. It can be said that Rajinikanth’s gangster flick will not have many viewers in the regions of East Punjab. The film will have a credible count in the metropolitan cities though.

‘Madaari’, on the other hand, will have limited audiences at the screens because it is already perceived as a serious film. The film might see a good crowd in the metros. With positive reviews and good word of mouth publicity Irrfan starrer film might gain above average collections.