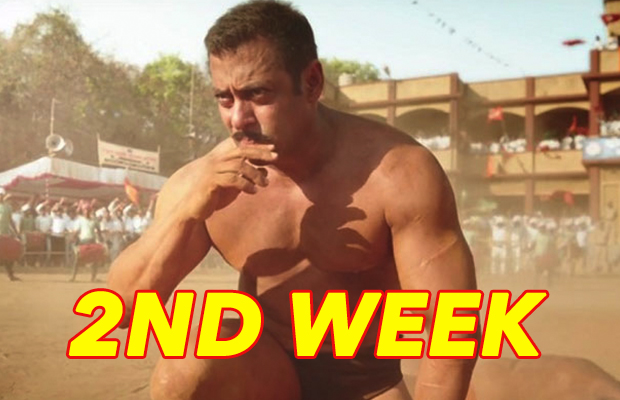 [tps_footer]Ali Abbas Zafar directorial ‘Sultan’ has surpassed its second week at the box office. The movie stars mind blowing actors Salman Khan and Anushka Sharma in lead roles. ‘Sultan’ has already created records with its gigantic earnings. The movie is still seeing crowds at the screens. The film has now gained the third largest figure after ‘PK’ and ‘Bajrangi Bhaijaan’.

‘Sultan’ released on the festive occasion of Eid and grabbed most of the numbers through its advance bookings. Moreover, the film also did well in the regions of Kolkata and South where generally Salman starrer films do not show massive business.

It can be rightly said that ‘Sultan’ is now a sure shot blockbuster of the year 2016. The second-week collection of the film comes to Rs. 48.75 crore net approx. The film is assumed to cross the mark of 300 crore. However, the drop in the collections on Thursday has been a hindrance to its figure. If ‘Sultan’ does not do well on Friday too i.e. today then it will have a tough time to reach the mark.

Currently the grand total collection of the Salman– Anushka starrer is Rs.278 crore net approx. The second-week collection of the wrestler based film is the sixth highest of all times. The Ali Abbas Zafar directorial is lacking behind in its second week collections from the films ‘Pk’, ‘Bajrangi Bhaijaan’, ‘Dhoom 3′, ‘3 Idiots’ and ‘Bajirao Mastani’.

The film has gained Rs.80 crore net approx. in its Mumbai collections. The movie has crossed the mark 55 crore in Delhi and UP region. ‘Sultan’ is the second highest grosser in South India after ‘Pk’. The Anushka Sharma starrer film raced past the figures of ‘Bajrangi Bhaijaan’ as the audience then opted for its box office rival ‘Baahubali’.

The release of ‘Kabali’ today will also hamper the growth of ‘Sultan’ in many regions![/tps_footer]