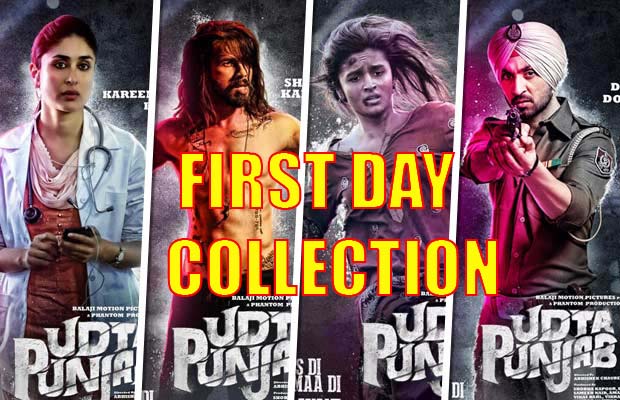 [tps_footer]’Udta Punjab’ received a good opening on the first day of its release. The film starring Shahid Kapoor, Alia Bhatt, Kareena Kapoor Khan and Diljit Dosanjh is based on the issue of drug abuse. The movie can be rightly termed as one of the most hyped ones. The film landed in a huge controversy with its hassle with the Censor Board.

The Censor Board almost stalled the film with 89 cuts, until the makers of the film approached the High Court. ‘Udta Punjab’ with its controversial stance created a huge mark on the minds of the masses, especially youth. Moreover, the film targeted the young adults and also the promotions of the movie were up to the mark.

Targeting social networking sites, the Abhishek Chaubey directorial was much awaited by the masses. The film was leaked online and even with the same, the box office collections have been commendable on the first day. The Friday collection of ‘Udta Punjab’ is Rs. 10 crores net approx. (Rs 100 million) These are the earnings of the early shows. Most of the earnings came from the areas of Delhi and Punjab consisting of around Rs.4 crore net approx. from the total.

With a credible star cast of Shahid, Alia, Diljit and Kareena, Udta Punjab is expected to do well in the metropolitan cities. Moreover, Diljit Dosanjh’s popularity in the North can further help the film even more.

Most of the earnings have come from the multiplexes. Now whether the weekend collections will be as good as the first day or no only time will tell. [/tps_footer]