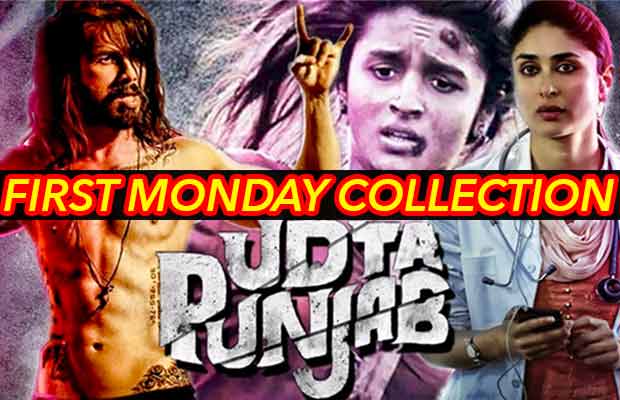 [tps_footer] Shahid Kapoor, Alia Bhatt, Diljit Dosanjh and Kareena Kapoor Khan starrer film ‘Udta Punjab’ is making impressive earnings. The film which met with loads of controversies before its release has finally entered its first week at the box office. Directed by Abhishek Chaubey the dark film has been well received by the masses in metropolitan cities.

‘Udta Punjab’ which is based on the menace of drug abuse in the state saw most of the youth at the screens. The film targeted the young adults and movie was equally promoted well on the social networking sites. Moreover, the hassle with the Censor Board further increased its popularity.

The total collection of the Shahid– Alia starrer comes to Rs. 37.75 crore net approx. (377 million). With a credible cast and positive word of mouth publicity, the film managed to gain good collections. The collection of Monday was 54% less than Friday’s. The film will see a good first week as there is no tough competition in its way.

The movie benefited mostly from the collections of the North.[/tps_footer]