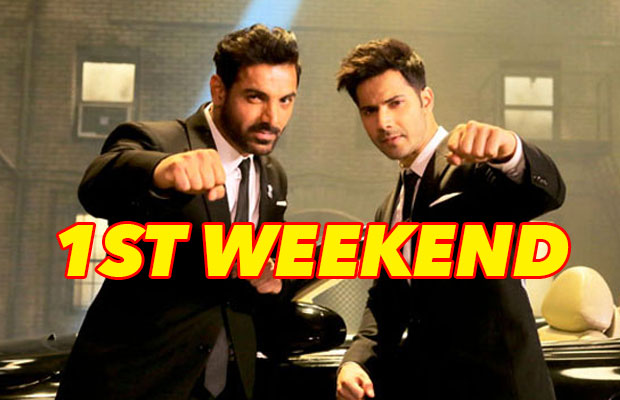 [tps_footer]‘Dishoom’ starring Varun Dhawan, John Abraham and Jacqueline Fernandez has crossed its first weekend at the box office. Directed by Rohit Dhawan, the film made a mark in the minds of the audience for its songs and trailers. Nevertheless, the hype created by the film did not translate into massive collections. ‘Dishoom’ is an action-filled film and has received mixed reviews.

The movie opened on an average note of 30% at the box office. The collections until now have been above average. The film was expected to do well in the regions of Delhi/UP but it did not fare. The Varun starrer movie is receiving a tough competition in the Punjab circuit from the film ‘Bambukat’.

The film ‘Bambukat’ has gained excellent opening and is also receiving loads of viewers. The action-oriented film with the credible star cast has gained maximum collections in Mumbai. The Saturday was a weak one for ‘Dishoom’ and now the film has to bear the load of weekdays.

The film is slow in its earnings in spite of a huge popularity. On the contrary, the four-week-old film ‘Sultan’ is still gaining viewers which is also a bad sign for ‘Dishoom’. The movie has to improve in its weekday earnings in the regions of East Punjab and Delhi/UP.[/tps_footer]