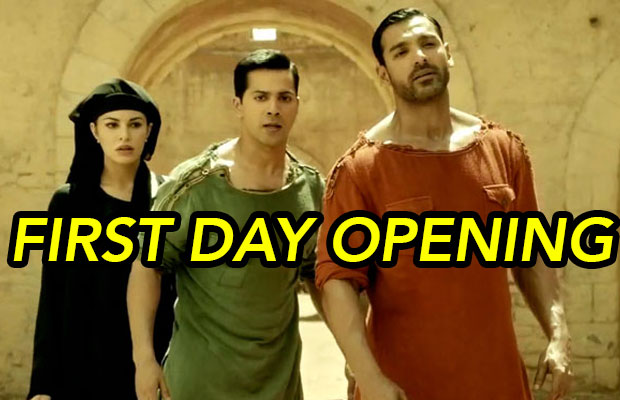 [tps_footer]Action packed film ‘Dishoom’ starring Varun Dhawan, John Abraham and Jacqueline Fernandez has finally released. The much-awaited film has been in the headlines for a long time. Directed by Rohit Dhawan, ‘Dishoom’ garnered loads of eyeballs for its star cast. After ‘Sultan’, this is the first film with a star-filled cast. The film is a concoction of action, comedy, and romance. The movie also has its share of thrill and adventures.

Finally, ‘Dishoom’ has entered its first day at the box office. The opening of the film is 30% which is decent enough. At some circuits, the film has opened on a very high note while the figures have dwindled in other regions. The opening of the film is lower than that of ‘Baaghi’. The movie is witnessing gradual growth at the metro multiplexes but with Varun Dhawan’s fan following in the cities, it is expected to increase.

The plus point for ‘Dishoom’ is that the film is a sole survivor this weekend. The film ‘Sultan’ has already reached its final collections and is in the third week whereas ‘Madaari’ and Hindi version of ‘Kabali’ are already low in collections.

This means that the Varun and John starrer film will have a smooth run to gain maximum collections at the box office. The film which is released in 3000 screens is expected to gain most of its collections from the multiplexes.

‘Dishoom’ has witnessed an above average crowd and the weekend is assumed to be fruitful.[/tps_footer]