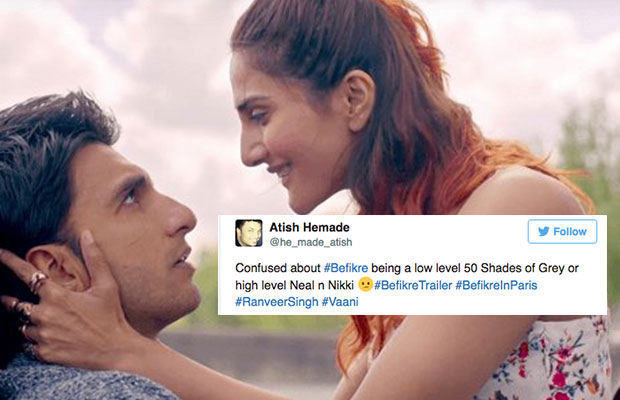 The trailer of much-awaited film Befikre, starring Ranveer Singh and Vaani Kapoor is finally out. The trailer looks quite exciting, seductive, and titillating. We get to see more of hot and steamy scenes and kisses between Ranveer and Vaani. Directed by Aditya Chopra, the film is releasing on December 9. Well, Twitter went berserk with many reactions to the trailer.

Here’s what Twitterati has to say about Befikre trailer:

your acting is damn good and natural. How do you do that bro? You're awesome #BefikreTrailer

Is #Befikre the Tamasha 2.0?? #justasking #BefikreTrailer

Also realised that #VaaniKapoor is having a hard time mouthing the dialogues coz of all the Botox around her lips n cheeks. #BefikreTrailer

#Befikre is basically that. A polished version of Neal n nikki. The lead actors sucked in both movies ? #BefikreTrailer

#BefikreTrailer BRING ON THE HEAT! ???

Did not like #BefikreTrailer! It is over the top and not in a show-me-more way, but more like I-think-I've-seen-enough-thank you way!

Fresh, Fun, Lively, everything that puts a smile on your face is Befikre #BefikreTrailer #Befikre