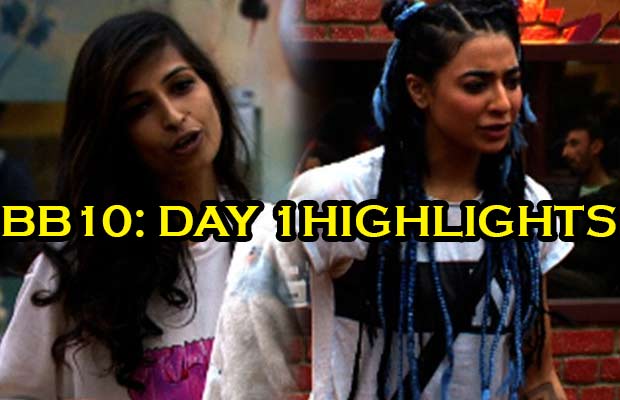 Salman Khan’s Bigg Boss 10, followed by an interesting line-up of contestants including 7 celebrities and 8 commoners has finally begun. The show started on an interesting note with a special task of “sevaks” and “maalik” given to the housemates of the show. Well, the first episode of the show was aired a few minutes ago and in case if you missed out to watch, here are highlights from tonight’s episode.

#Day1 starts: The housemates’ wake up with all smiles and also dance on the wake-up song. They all greet each other.

#First task:  As part of the first task, the celebrities are made ‘sevaks’ while Indiawaale (common people) are the ‘maalik’ of the house. From washing clothes to cooking food, the celebrity contestants have to every work of the house while commoners can’t do anything. The twist is that the ‘Maaliks’ can change the rules at any time.

#Task rules: Bigg Boss brings task rule book for the housemates. Numbers of rules were written in the book for the “sevaks” and “maaliks”. The rules mentioned were- 1.) Sevaks can’t use the gym, Jacuzzi and another luxury of the house. 2.) If maalik wants make some request or wish to sevak, they should use “Hukum ki ghanti.” 3.) Maalikas can punish sevaks for breaking rules. 4.) Sevaks can eat only boil food and can’t use utensils. They can eat food only on the banana leaf. 5.) They can sleep only after maaliks of the house go to sleep.

#Priyanka Jagga’s fight with VJ Bani: Noida based recruiter, Priyanka created a stir inside the house by throwing her tantrums on the celebrity contestants of the show. At first, she snapped Bani by asking her age. The two got into a quarrel in the bedroom area of the house. The two got into a fight when the Jagga asked Bani her age. “Bani, ye bahut galat baat hai, mai aapse baat kr rahi hu. Aap na jawab de rahi hain, uske baad mere saamne se nikal gayi,” Priyanka tells Bani. To which Bani responds, “Mujhe bura laga aapki baat ka.”

#Priyanka and Bani sort their misunderstanding by hugging and saying sorry to each other.

#Om Swami’s funny confession: Swamiji, who is already in the limelight over his past stints, made a funny yet silly confession to the commoners of the house. He confessed that when he was born he didn’t cry like other normal children but directly started speaking words. He also mentioned that he is not aware of this but this was narrated to him by his Guru.

#Akansha Sharma and VJ Bani bond at the pool area of the house. The two bond and enjoying gossiping about how commoners are harassing them, joining them is Navin Prakash.

#Nominations: Each commoner gets a chance to nominate two contestants in the confession room. Monalisa and Gaurav get nominated after commoners vote. Bigg Boss also gives an opportunity to celebrity contestant to choose two names mutually and nominate two commoners. After discussing, the celebrity gang vote- Priyanka Jagga and Mannu.

#Mannu gets offended after getting nominated and walks off from the living area.

# Manjo Punjabi (Mannu) tries to harass celebrity contestants by not sleeping on time as the rule says- sevaks can’t sleep before “maaliks”. Gaurav Chopra, Karan Mehra, and other celebrity contestants argue over this with Mannu but he gives excuses saying that he had some work in the kitchen.

# In the tomorrow episode you will see how Swamiji shows his real side and makes a personal comment on Akansha Sharma, which created a heated argument between the two. Akansha also warns Swamiji to use his words wisely as she is not going to take the rubbish.