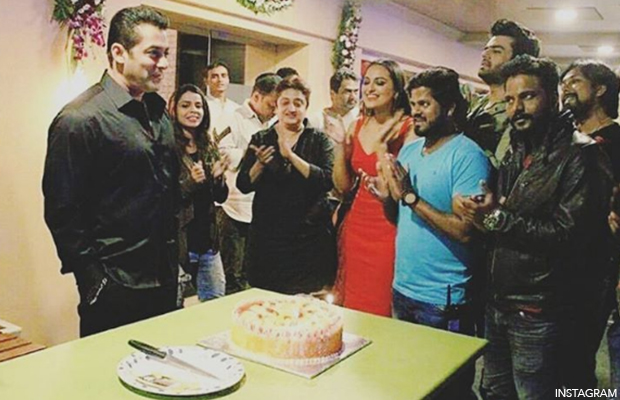 Bollywood actor Salman Khan had grand 51st birthday celebrations with his family and close friends at his Panvel farmhouse on December 27. Who’s who of the B-town was seen at the birthday party to makeSalman Khan’s birthday special. But Bigg Boss 10 makers and crew members were also nowhere behind to make Sultan star’s birthday a memorable. Before Salman Khan headed to Panvel for his birthday celebrations, the actor got a special surprise by Bigg Boss 10 crew members.

One can see in the photos, Sonakshi Sinha and Manish Paul along withBigg Boss 10 makers celebrated Salman Khan’s birthday in advance inside actor’s chalet. The actor even cut the yummy fruit cake and had a wonderful time with Manish Paul and Sonakshi Sinha, who were the special guests of the weekend.

Also, before signing off, the contestants surprised Salman by giving a dance performance on his greatest hits on the occasion on his birthday.  How wonderful is that? Don’t you think?