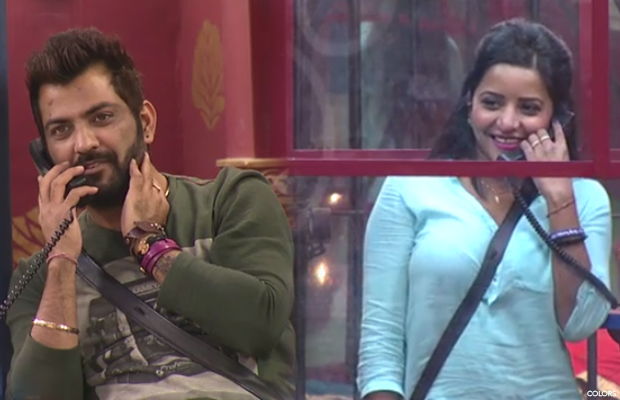 Ever since Mona Lisa‘s boyfriend Vikrant Singh Rajpoot slammed Manu Punjabi in Bigg Boss 10 house, things have changed. Monalisa and Manu have maintained distance after that incident and have always made sure that they don’t talk anything personal until they are inside the house under the watchful cameras. Well, the makers can’t show everything and anything in the 1-hour episode of Bigg Boss and so, here we bring some unseen happenings.

As Lopamudra Raut and VJ Bani got into an ugly fight, Bigg Boss had canceled the luxury budget task of the week. After Bigg Boss announced the same, the housemates were chilling in the garden area and that’s when Monalisa thought of using the opportunity to use phone booth of the call centre task just for fun.

Monalisa, who was the “sanchalak” of the task, went inside the phone booth and made a call to Manu Punjabi. Mona started her conversation very sweetly, which made Manu ask her that is she going to talk to her on the phone in the same way when they will be talking outside. Mona then asks him that how does he want her to talk to him and the reply comes, “I leave it up to you.”

Manu then takes the conversation ahead by talking more sweetly with her, which leaves Mona blushing. She also tells him that his sweet voice is giving her some different feeling.  Manu gets filmy and tells her, “manu ki maan ke aankho se mona dikh rahi hai….. Kahi baar shabdh kaafi nai hote.”

After getting flirty with each other, Manu asks Mona to keep the phone as they have mics along with them. Mona goes clueless and asks what he means by having mics. Manu Punjabi replies that despite talking on the phone from distance, they are not alone as the mics are still with them.

Does this statement mean that Manu and Mona are maintaining distance as they are living under the watchful eyes of cameras? Manu and Mona who were quite close to each other initially, are they being cautious now? Share your views in the comments section below.