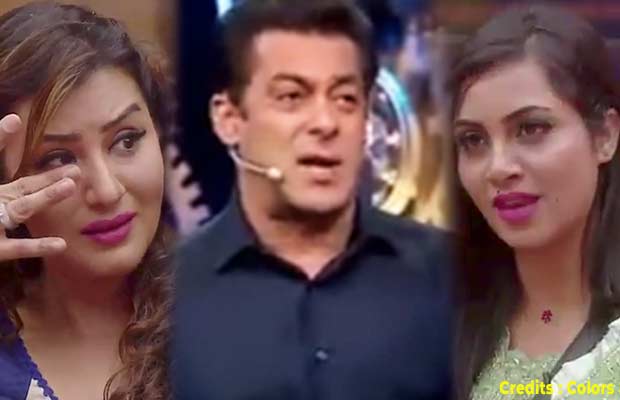 Bigg Boss 11 will see few TV stars entering the house. The episode will also turn intense as Salman Khan will lose his cool over Arshi Khan. Yes, Salman will lash out at Arshi over using venomous words for Shilpa Shinde. He also takes her class for disrespecting Shilpa’s mother by not greeting her.

The superstar also sarcastically congratulates Vikas Gupta saying look what captain he has chosen for the house. Shockingly, Arshi back answers Salman and said that how Shilpa Shinde’s actions in the house are unnoticed. She also calls Salman a biased host.

To uninitiated, everybody was recently in for a shock when Arshi suddenly accused Shilpa of giving her father a dirty look and disrespecting him. All the housemates tell Arshi that she got the wrong impression. Despite that, she says that she will never forgive Shilpa Shinde.

When Shilpa’s mother entered the house, Arshi behaved quite weird. Shilpa introduced her mother to everyone and also showed her the house. Once the contestants were released from the freeze mode, except Arshi, all the housemates went to greet Shilpa’s mother.

Check out how viewers have reacted to this:

I mean who the hell are these people… Atleast resp the person who is showin u d right path.. Pr nhi yaha bhi badtameezi. #WeekendKaVaar #bb11 #BB11 #BiggBoss11 #BiggBoss

Come on Arshi whole India bashed you for behaving so disgusting when shilpa mom entered house. Like seriously Man!! What salman said is majority of ppl’s thoughts #BB11

Click here for all latest stories on Bigg Boss 11

What the hell is she talking to Salman Khan ,is this a way of good behavior, how cheap and wahiyat talking of arshi Khan, pehle apko bahat pasand karta Tha, but you lost your place arshi Khan, stay away from Shilpa shinde

Go to hell Arshi khan how dare you speak to salman khan in this tone??