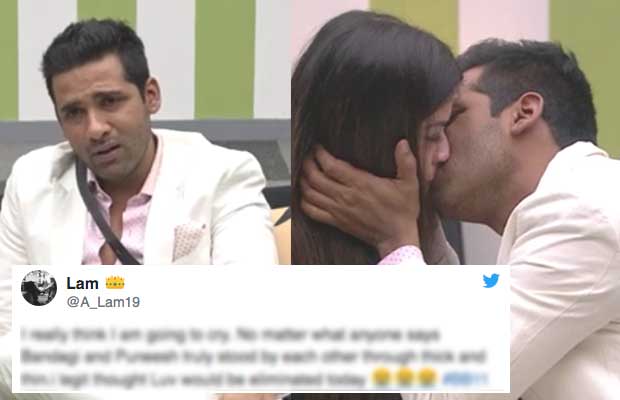 Twitterati is crying after seeing the romantic video of Bandgi Kalra and Puneesh Sharma!

The controversial reality show Bigg Boss has seen many separations earlier. But last night’s episode was something different. Bigg Boss 11 had only one pair of love birds – Bandgi Kalra and Puneesh Sharma. And now they have been separated as the young girl was evicted last night.

The couple along with Luv Tyayi was the one nominated to leave the house this week. When Salman Khan, the host of the show announced that Luv is safe, the love birds’ faces turned sad. As it meant that one of them had to leave, leaving the other behind inside the house.

Before the name of the evicted contestant was announced, the Tiger Zinda Hai actor sent Bandgi and Puneesh into a separate room. It was to let them enjoy their last moments inside the house together.

Salman even said that he believes that their relationship is true. And also that he wants them to prove it to the world by being together always.

While they were inside the room, a video was played which captured all their special moments. And it was very obvious that both Bandgi and Puneesh turned teary-eyed on seeing the video. When Salman finally announced that it is Bandgi who has to leave, it left Puneesh heartbroken.

After coming out of the house, Bandgi has talked about her relationship with Puneesh. Read here: Bigg Boss 11: Evicted Contestant Bandgi Kalra’s SHOCKING Revelations On Her Breakup, Puneesh Sharma And More!

The man cried his heart out hugging his lady-love. And now it seems that they were not the only ones crying!

After seeing the romantic-emotional video, Twitter has been flooded with sad reactions from the people. There were people who found the video very heart touching. And there were many others who admitted that the video left them in tears.

Check out some of the comments from the people here:

idk puneesh and bandagi's story fake or real. Bt they made me cry. 😓😧

Bandagi's eviction is really inappropriate.. Luv is useless … Feeling so damn bad for puneesh… His tears made me cry #BB11 #BiggBuzz #BiggBoss11

Today's episode was too emotional! Puneesh was crying like a baby! You guys made me cry. I hope your love story is real. @BandgiKalra1