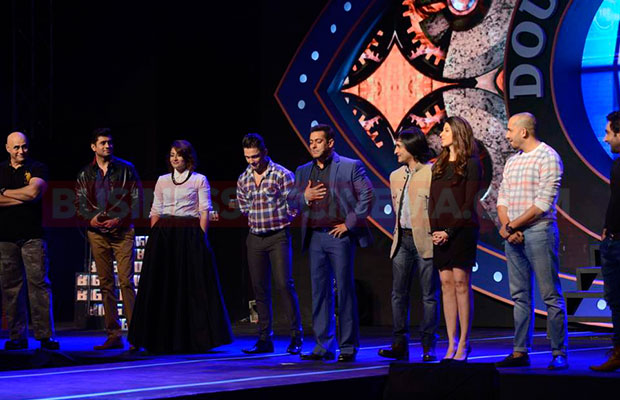 [tps_footer]Bollywood’s ‘Bajrangi Bhaijaan’ actor Salman Khan has geared up for first press conference of the most loved controversial reality show ‘Bigg Boss 9 Double Trouble’. With anticipation level increasing to know in and out about the show, Salman and the makers of the channel will be revealing about the show in a very short time.

The set for the event is all set and a big watchful eye logo of ‘Bigg Boss 9’ is created from where Salman Khan made a grand entry of him with the most loved and favourite song ‘Main Hoon Hero Tera’ playing in the background. The actor looked handsome dressed in blue suit and welcomed media and audiences in his own patent style.

With Salman Khan’s Bigg Boss 9 going on air from October 11, one would expect his ex-flame Aishwarya Rai Bachchan and her ‘Jazbaa’ team to promote their film on the show. When Salman was asked about it, he cleverly avoided it. He pointed out at the journalist and said, “You knew this was the last question and you saved the best one till the end.”

Khan later surprised all by crooning ‘Aate Jaate’ from his film Har Dil Jo Pyaar Karega! Salman Khan and his habit of avoiding questions, so he just sings..

The actor didn’t choose to reveal about the concept of the show, as he didn’t want to kill the suspense of the show now itself. The actor also invited ex-contestants of Bigg Boss including Rajiv Paul, Siddharth Bhardwaj, Gautam Gulati, Puneet Issar, Pritam Singh, Mahek Chahal, Ali Quli Mirza, Karishma Tanna and Praneet Bhatt.

Salman Khan made the contestants to sit in the witness box and played a quiz of Double Trouble with them. The actor went on asking ex-contestants about their experience of the show and much more.

Salman Khan, who is known to come up with new twists and turns, has taken the format of the show ‘Double Trouble’ a notch up this time. It already showcases that this season is surely going to be greater and different from what the viewers have seen in the past.

Stay tuned to Business Of Cinema to catch the exclusive update on ‘Bigg Boss 9’!
[/tps_footer]