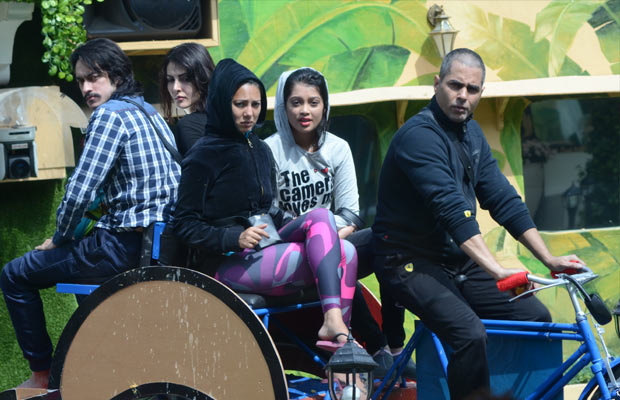 [tps_footer]All the contestants in the Bigg Boss 9 house are given a task in which they need to perform entertaining acts and they are divided into two teams. Rimi and Rochelle have to perform individual dances. Suyyash plans to do a cameo in Rimi’s performance and this irks Rochelle.

The two teams go overboard and fight over this. Kishwer and Rochelle raise their voices and end up crying. The whole house is fighting with each other due to minor disagreements and issues.

The situation becomes ugly and the two teams don’t want to see eye to eye. Aman plays the pacifier and requests everyone to stop fighting because it’s Diwali. The two teams finally come to a consensus and perform their acts with vigor and enthusiasm

All is well that ends well in the Bigg Boss house! Stay tuned to businessofcinema for all latest updates.

The Highway task on the second day in Bigg Boss 9 house brought in an unexpected turn when Team A had to dismount Team B from the rickshaw.

Kishwer, Prince and Suyyash do not leave a single opportunity to irritate members on Team B and Mandana is on the top of their list.

Prince throws mashed aloo waste on Mandana and even smeares it on Rochelle’s face leaving both of them agitated. Kishwer gleefully observes and encourages Prince to continue with this tactic.

Later, Prince and Kishwer put cold water on Mandana irritating her even further. In order to save Mandana’s mike, Kishwer holds it and pulls it aside when Mandana unexpectedly kicks Kishwer hitting her abdomen.

In no time, Kishwer hits the ceiling and throws away her mike announcing that she won’t continue with the task. She also asks her team members Suyyash, Prince, Rimi and Puneet to comply with her. They immediately remove their mikes boycotting the task.

Later Bigg Boss called Kishwer in the confession room to have a one-on-one conversation. Kishwer cries her heart out and tells Bigg Boss that she wants Mandana to be disqualified and thrown out of the house as she got violent during the task. She further adds that Mandana should not be allowed to stay inside the house as she has hurt Kishwer and this is against house rules. While Bigg Boss promise Kishwer that Mandana will be punished for her actions, he also tells Kishwer to get back into the game and call off the strike.

Adamant to get Mandana ousted from the house, Kishwer asks Suyyash, Prince, Rimi and Puneet to continue with the task while she stays out of it.[/tps_footer]