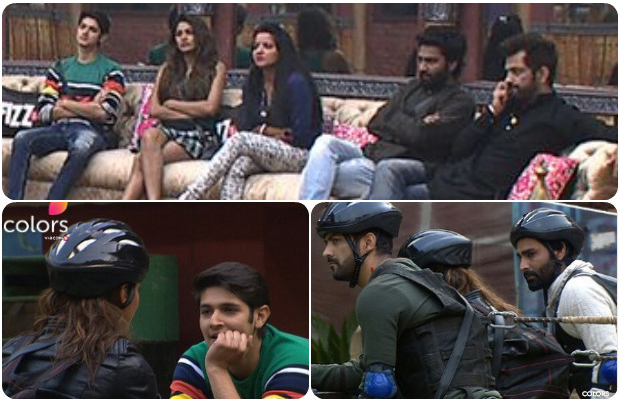 Bigg Boss 10 is heading towards its finale week and the makers are trying their best to keep viewers glued to their TV screens every night. After spending three months amid fights, controversies, brickbats and what not, 6 contestants Lopamudra Raut, Monalisa, VJ Bani, Manveer Gurjar, Manu Punjabi and Rohan Mehra have left to fight for the Bigg Boss 10 trophy.

Tonight, housemates will be seen fighting out for the most difficult task of the season ever. The task is divided into two teams, Lopamudra Raut, Manveer Gurjar and Manu Punjabi will be in one team while Rohan Mehra, Monalisa and VJ Bani will be in another team. For the task, all the team members will be tied to a stretchable rope with one leg being stretched and one hand on the buzzer. Yes, the team members can’t remove their hand from their respective buzzers at any cost. If they do so, they are out from the game.

The twist in the game is, other team members will be harassing them by doing whatever they want to do in order to remove them out of the game. Manveer, Lopa and Manu’s team goes first for the buzzer round while other team members plan to destroy them, Mona, Bani, Rohan pour oil, cold water and what not to harass them. They went to every extent in order to irritate and let them lift their hands from the buzzers.

So who do you think had to give up the task from Manu, Manveer and Lopa’s team? Or did they manage to survive in the task despite all the harassment?  We EXCLUSIVELY reveal, two contestants have already given up while one from their team is still surviving in the task.

We EXCLUSIVELY reveal, Lopamudra Raut, and Manu Punjabi have quit the task as they could not tolerate the harassment from the other team members while Manveer is still in the game. He continued the task for almost three hours until Bigg Boss announced that the task for the day ends there.