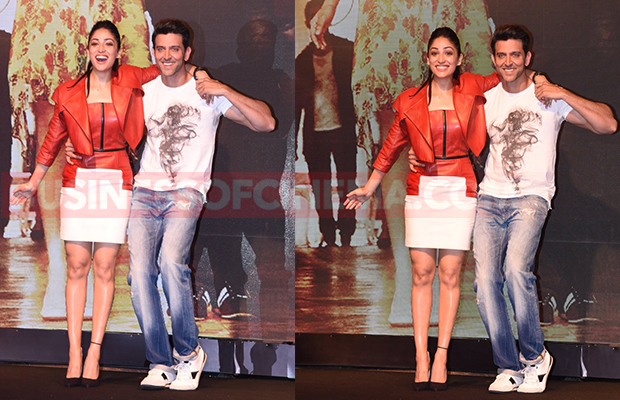 Bollywood stars Hrithik Roshan and Yami Gautam were clicked at the launch of their fourth single “Mon Amour” from their upcoming film Kaabil. The song of the film has been released on the same day as the makers of Raees released their song Zaalima. Just like the clash of their films, it seems the two are giving each other pre-release competition during the promotions too.

At the Kaabil sing launch, Hrithik and Yami’s impromptu dance was much to the delight of the shutterbugs. The duo looked amazing together and their hot chemistry was quite evident at the launch event. For the launch, Yami Gautam picked Didit Hediprasetyo separates with her hair pulled back and a pair of black pumps finished out her look. While Hrithik Rohan looked dapper in his cool look.

At the song launch event, like other several Bollywood stars, Hrithik Roshan also came out strongly against the Bengaluru incident and condemned it. Hrithik said, “It is sad. We all bear a responsibility and we all must do something about that…I feel very strongly, as a father, as a member of the society, that if something like this is happening in an environment so close to me, then I definitely must be impacted, must be affected and I must do something about it.”

Hrithik Roshan also said that he can do everything that he believes in. The actor said, “I think I am capable of doing everything that I want to do in my life. I think we all should have the same thought process because that is the starting point. If you don’t believe you can do it, you can’t. I truly believe that we all are capable of doing much more than what we think we can.”

Talking about his challenging role in Kaabil, Hrithik said, “As an actor, I realise that it takes time to play a blind person — how to get the body language right or how to react, makes even tougher. In this regard, it (the role) is different. This is the most difficult role I’ve done.”