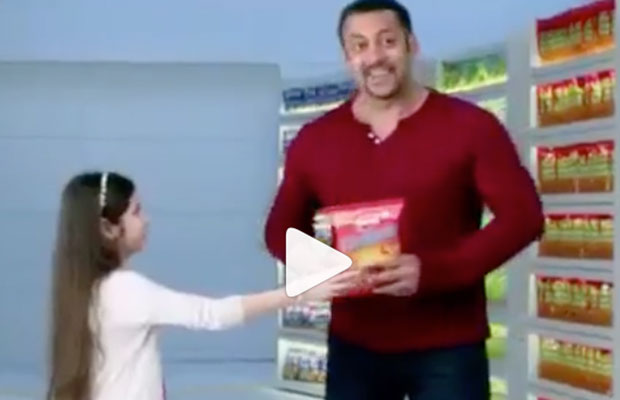 Salman Khan and cute Harshali Malhotra won our hearts with wonderful performances in blockbuster Bajrangi Bhaijaan. Moreover, Salman, it was Harshali, the hero, and soul of the film. Her cute and adorable looks, charm and innocence received positive responses. Ad guess what? Harshali and Salman are back together in this entertaining ad.

Kajal Malhotra took to her Instagram to share this interesting ad. It is an ad for diamond chips. They’ve recreated superhit song Selfie Le le re as a jingle for this ad. Salman looks dashing as ever, whereas Harshali looks adoring. Dont miss this sweet and crispy ad.

On the professional front, the actor is shooting for Tubelight in Manali. The film directed by Kabir Khan stars Chinese actress Zhu Zhu in the lead role. The film will be releasing during Eid 2017. He will also have one more release in 2017. His film, opposite to Katrina Kaif, Tiger Zinda Hai will be releasing on Christmas 2017. It is a sequel to his 2012 super hit, Ek Tha Tiger. Sultan director Ali Abbas Zafar will helm the sequel. The film will be clashing Sanjay Leela Bhansali’s Padmavati.