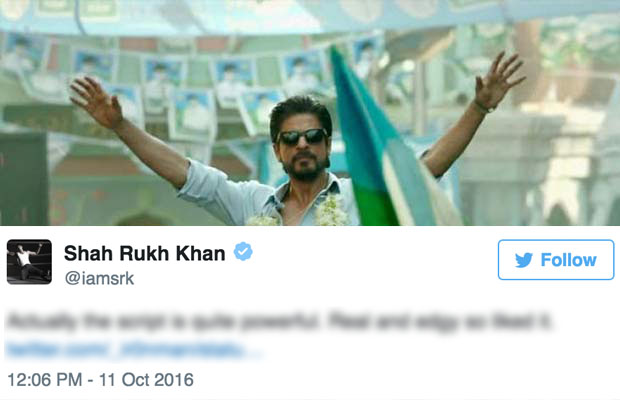 When Shah Rukh Khan pushed the release date of Raees ahead, his fans were very disappointed with this decision. The day since the teaser was out, fans were eagerly waiting to watch the film in theatres. Sadly, they have to keep waiting longer now.

Well, currently, rumours are again making rounds that Raees is not releasing in January. In fact, according to reports, Pakistani actress Mahira Khan will also be replaced in the film. Due to a ban on Pakistani actors in India and threats to SRK for releasing Raees, apparently, the makers have decided to replace Mahira.

Fans are again worried as they are really looking forward to Raees. But the delay in the release of the film is affecting and saddening them. Today, when King Khan was doing #AskSRK on Twitter, he was flooded with questions about Raees trailer and its release date. SRK answered them and revealed a lot about the film.

One of the fans asked him why did he give up on the release date of Raees.

I am not a very dependable dater. https://t.co/oRWPDwU15T

A fan asked him when is the trailer releasing.

Not sure but quite soon I presume https://t.co/gNZ6IP84Cl

King Khan even answered if the trailer is releasing on his birthday or not.

I am not sure. Not planned it yet. https://t.co/BPKM0EbKf1

One of the fans asked him that isn’t Raees getting too delayed. To which SRK says,

Yes but had to undergo surgery right in the middle of schedule. https://t.co/WY4TzAYSQQ

Baadshah even answered what inspired him to do the film

Actually the script is quite powerful. Real and edgy so liked it. https://t.co/s8QeWpjZuo

Also Watch: Here’s Why Shah Rukh Khan Will Not Shoot With His Raees Co-Star Mahira Khan!