TV actor Namish Taneja was robbed of belongings worth Rs 4 Lakhs including cash, a mobile phone and gold jewellery.

The actor took to Instagram to share the sad news with his fans and followers. He wrote, “It’s really sad n depressing, when someone steals our hard earned money. #gotrobbed”. 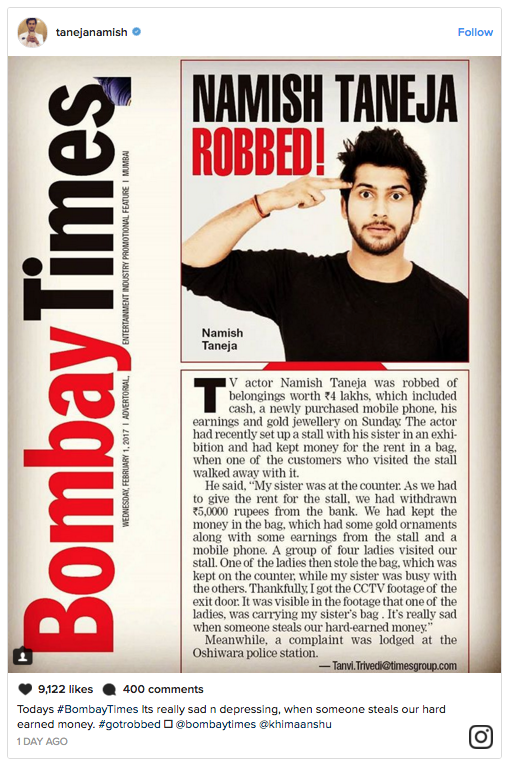 A complaint about the robbery has been lodged at the Oshiwara police station. The actor co-owns a boutique with his sister. The incident happened when Namish along with his sister had set up a stall during an exhibition. They had kept the money for the rent in a bag which was then taken away by a customer who visited their stall.

Recalling the incident, Namish said, “My sister was there on the counter. As we had to give the rent for the stall, so we had withdrawn INR 50000 from the Bank. We had kept the money in the bag. It also had some gold ornaments along with some earnings from the stall and a mobile phone. A group of four girls came in to buy some stuff. One of the girls stole the bag, which was kept on the counter, while my sister was busy with the other two. After a while, she discovered the theft and called me. Thankfully, I got the CCTV footage of the exit door. It was clearly visible in the footage that one of the girls was carrying my sisters’ bag while going out. We immediately blocked all the debit and credit cards and lodged the FIR. I had also kept my wallet in that bag, but fortunately, because I had to go out for some work, I took it with me. It’s really sad and depressing when someone steals our hard earned money.”

Let’s hope most of his belongings are recovered and the culprits are caught!