Varun Dhawan has established himself as one of the brilliant actors of the current generation by giving back-to-back hits. The actor is busy with some great films in his kitty. Varun, also known for his funny, friendly, and positive nature loses his calm on one boy. This boy annoyed him to the core that the Dilwale actor had to tell him to shut his mouth.

Yesterday, Varun’s car got damaged in a road accident. Fortunately, nobody was injured. A boy witnessed this accident and started spreading the false news on Twitter.

This false news annoyed Varun, who replied to him and slammed him.

Varun’s tweet says, ‘The car that is damaged is my car. I had come to help someone in my family who had an accident.i suggest you shutup.’ 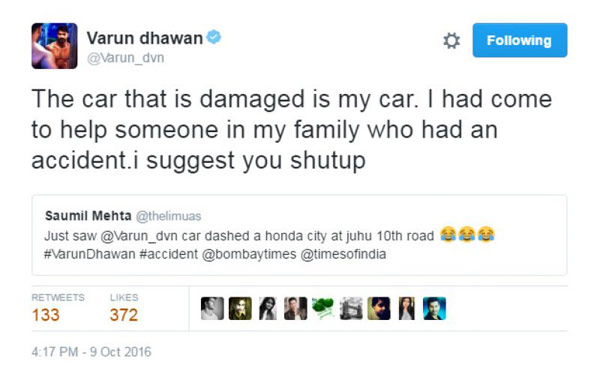 The actor again tweeted, ‘@thelimuas you want to get famous  by making up things. Now your claim to fame is you got trolled by me #jackass.’

Well, his fans were worried when the news of his accident broke out. Hence, the ABCD 2 actor tweets that everyone in his family is safe.

He tweets, ‘For everyone asking everyone in my family is fine and no one is injured.thank you.’

On the professional front, he is shooting with Alia Bhatt for Badrinath Ki Dulhania. He will then start with Judwaa 2, a sequel to Salman Khan’s superhit film, Judwaa.