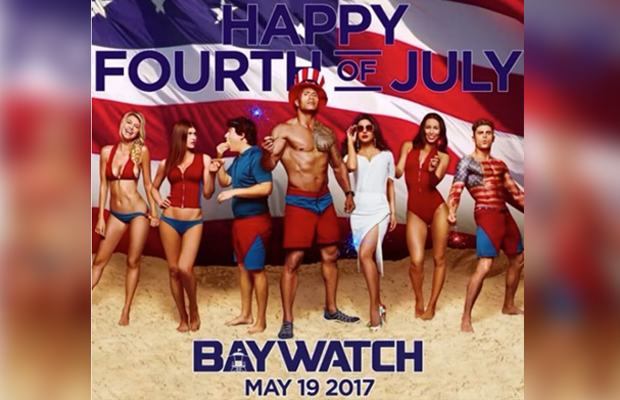 [tps_footer]Finally, the ‘Baywatch’ poster featuring Priyanka Chopra is out.  Priyanka who has earned laurels for her character in the series Quantico will now make a Hollywood debut with ‘Baywatch’. The amazing actress has successfully entered in the Hollywood industry and must say the starlet is flaunting her élan to all extent.

‘Baywatch’ is one of the most anticipated movies. The film will see actors Dwayne Johnson, Zac Efron, Kelly Rohrbach, Alexandra Daddario, Jon Bass, Ilfenesh Hadera and Priyanka Chopra. On the backdrop of Fourth of July the whole cast of the film is seen in the poster.

Until now, there was no sign of PeeCee in any of the glimpses and posters. This is the first poster wherein Priyanka’s character is seen. The Bajirao Mastani star will play the antagonist named Victoria Leeds in the film.

‘Baywatch’ which was one of the most successful TV series is still adored by the masses. The film adaptation of the series is already much in news. The poster is set in a beach theme with the backdrop of Fourth of July. The signature red and blue is much present in the poster.

Looking different from the rest, Priyanka Chopra is the only one in white. Playing the role of an antagonist this poster also hints at her unique character. Moreover, the film will also feature the well know Baywatch star Pamela Anderson in a brief glimpse.

Directed by Seth Gordon, the glamorous film will release on May 19th, 2017.[/tps_footer]