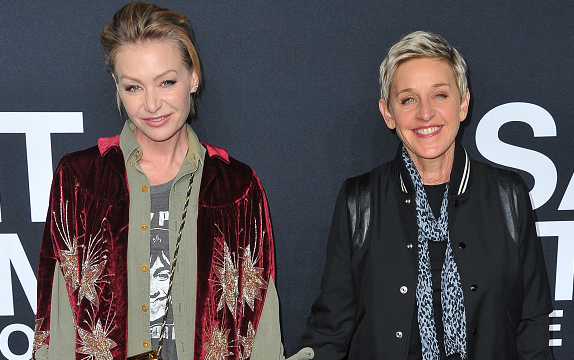 [tps_footer]Hollywood’s most loved couple Ellen DeGeneres and Portia De Rossi are calling it quits. The couple has been married for seven years now and have, reportedly, filed for divorce.

After dating for a while, Ellen and Portia got married in private ceremony in 2008 at their Beverly Hills house in California. According to a report, Portia is leaving Ellen for a man. They have been spending less time together due to their hectic work schedules and have been drifting apart. This has led to a lot of problems between the couple. Portia has been working on Shonda Rhimes‘ show ‘Scandal’ where she is allegedly fallen in love with one of her co-stars. It is unknown who she has fallen for but it looks like this isn’t going to end well. It is reported that Ellen has filed for a divorce that will cost a whooping amount of 220$ million.

This won’t be the first time Ellen got dumped by her partner for a man. Before she started dating Portia, Ellen dated actress Anne Heche for three years. She broke up with the talk show host as she fell in love with Canadian actor James Tupper.

It would be really hard for the fans to witness this as they had loved Ellen and Portia so much and it was a groundbreaking deal for the same s*x marriage. No official statement has come from any of them. Portia is currently working on ‘Scandal’ whereas Ellen continues to host her talk show, ‘The Ellen Show’.[/tps_footer]