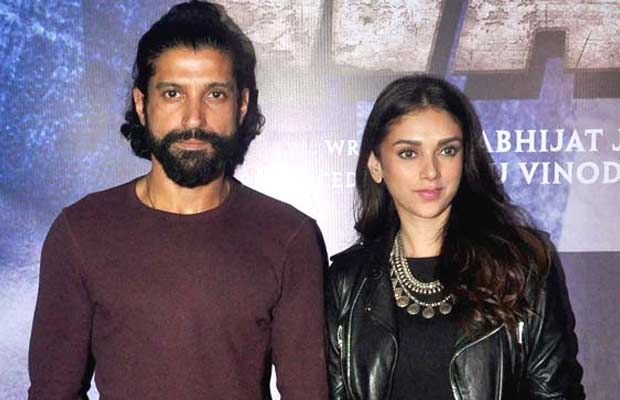 [tps_footer]We hope, both Farhan Akhtar and Aditi Rao Hydari won’t deny being together anymore as they attended Prince William and Kate Middleton’s Bollywood gala event last night, ‘together.’ This event was full of Bollywood stars like Shah Rukh Khan, Aishwarya Rai Bachchan, Sonam Kapoor, Alia Bhatt, Madhuri Dixit Nene and more celebs who were all set to welcome William and Kate. But, Farhan Akhtar accompanied by his Wazir co-star Aditi Rao Hydari made more headlines than this royal event. It was reported during the making of the movie Wazir that Farhan Akhtar’s closeness with Aditi Rao Hydari is the reason for him to end his marriage with his ex-wife Adhuna Bhambani.

It was all denied earlier and Farhan even accused media of spreading such rumours instead of saying directly if he is dating Kalki Koechlin or Aditi Rao Hydari. Farhan is working with Shraddha Kapoor in Rock On 2 and there were rumours of their growing closeness as well, but again, nothing was accepted or denied. But, what should we think after Farhan Akhtar and Aditi Rao Hydari made such a big move and decide to come together to attend an event which they know will be covered by Indian and foreign media as well ? Now, we hope they don’t rubbish this news calling it a ‘coincidence.’ Such a grand one![/tps_footer]