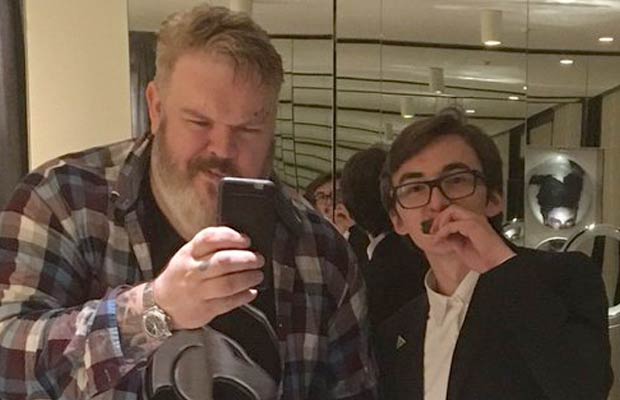 [tps_footer]If you are a fan of the ‘Game Of Thrones’ series, it goes without saying that by now you’re used to characters dying abruptly and not coming back on the show. While fans across the globe are still mourning the death of Hodor, the man who played the character on the show is being given the best and biggest send-off that any character from the show has received thus far.

Kristian Nairn who played the character on the show has been surprised by the outrage that fans have shown to his co-star, Isaac Hempstead Wright. Wright who plays Bran Stark has been receiving a lot of hate from fans and the hatred is almost as much as that for Ramsay Bolton.

Nairn who plays the large and non-verbal Hodor was surprised by co-stars who gifted him a cake shaped like the door. After that horrible death, we would not blame him if he decided to simply sit in a corner and dig into his cake. However, Nairn being the sweetheart that he is, decided to share the cake with actor Isaac Hempstead-Wright.

“Even after all he’s done, still willing to give him some of my cake”, said Nairn jokingly about the blame viewers had placed on Bran Stark. Well, while this may be too little, too late; we hope that fans do recuperate from this loss in time for whatever roller-coaster thrills the next episode is set to bring.[/tps_footer]