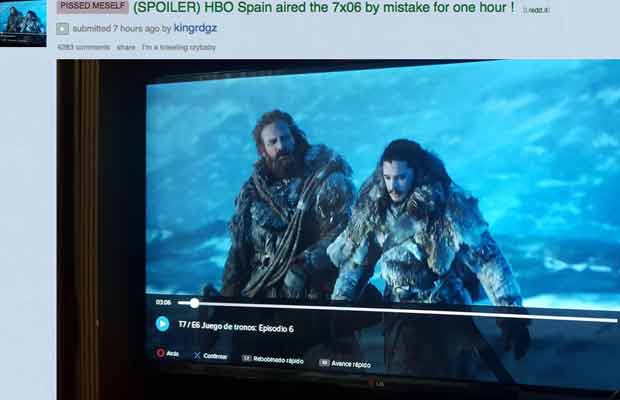 The major hack of entertainment channel HBO last month led to a massive loss of data from their servers. The channel admitted that they were working on securing the leak and retrieving the data from the hackers. The media giant has several shows at stake. It creates some original content as well. HBO’s content includes ‘Game of Thrones’ which is one of the shows to be attacked time and again. As well know it is a popular show and quite profitable to the channel.

The controversial show ‘Game of Thrones’ was once again found making news as HBO Spain mistakenly played the sixth episode before its date.

‘Game of Thrones’ episode 6 was accidentally aired for almost a 1 hour before it was noticed and taken down. It was first seen going viral on a Reddit thread called /r/FreeFolk. The leak was caught by fans and shared virally.

A twitter user also shared a video of the episode while it was airing. The scenes from the reddit screenshot and twitter video show a unseen part which wasn’t in the trailer of episode 6. Thus fans believe that it was leaked.

Several fans shared different links in the comments about the leaked episode and even a sample two minutes with screenshots and gifs. Several spoilers were making their way across social media after the obvious leak.

The last episode was also leaked but by HBO’s partners in India. Star India’s online streaming app Hotstar had leaked the episode before the due date. Four were arrested for the leak; out of them, three are current employees and one former. They were caught after an internal investigation.

HBO informed that they hadn’t heard of any leaks yet and aren’t sure what is going on. Fans now on the Reddit thread are confused if the leak actually happened as there is no video or messages anywhere except that screenshot.

HBO tried to contain any further leaks from the hackers. The leak includes scripts of ‘Game of Thrones’ (GoT) and employees personal information. HBO is rumoured to agreed to offer $250,000 to them for stealing nearly 1.5TB data but the news isn’t confirmed yet.