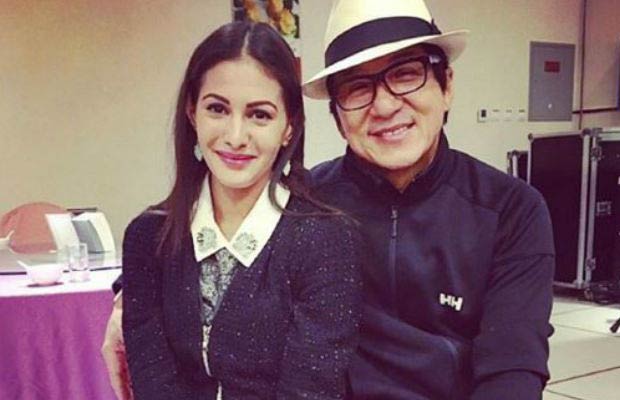 [tps_footer]It’s reported by a leading daily,

“On the last day of the Iceland schedule, Jackie Chan got a cake for Amyra and the team as they were shooting in extremely difficult weather conditions and he was impressed with Amyra’s professionalism. The team was shooting in cold conditions and they did glacier climbing too. Hence, this was his way of thanking them,”

Hmm.. So, our cute Amyra Dastur gets a sweet cake just like her from the action legend himself, Jackie Chan. That’s adorable ! But the shoots for this movie has been performed under the toughest of environments to deal with. Its said that Jackie Chan was impressed with Amyra‘s professionalism so much that he got a farewell cake for her and everybody on the set shared some really sweet moments with each other and had a happy day together after shoot.

Reportedly, the shooting was taking place at Glacier Lagoon. Kung Fu Yoga is a part of the three-film agreement signed between the two countries during Chinese President Xi Jinping’s visit to India. This deal is working out and we can expect some deadly action packed films.

Kung Fu Yoga is directed by Stanley Tong and it has a mind blowing star cast that includes Jackie Chan, Amyra Dastur, Aarif Rahman, Sonu Sood and Zhang Yixing. Initially, it was said that Aamir Khan will also be a part of this Chinese-Indian co-production of Taihe Entertainment and Shinework Media. But, unfortunately Aamir had to refuse doing this movie because he had given his dates for his movie Dangal where he will portray the character of a wrestler. And later, even Katrina Kaif was approached to join the star cast of this movie but even that didn’t workout and finally we will get to see Amyra Dastur and sweet, handsome hunk Sonu Sood in this flick.

We wish the entire cast and makers of this movie a big good luck ! Hope this flick turns out to be the biggest grosser movie of the year.[/tps_footer]