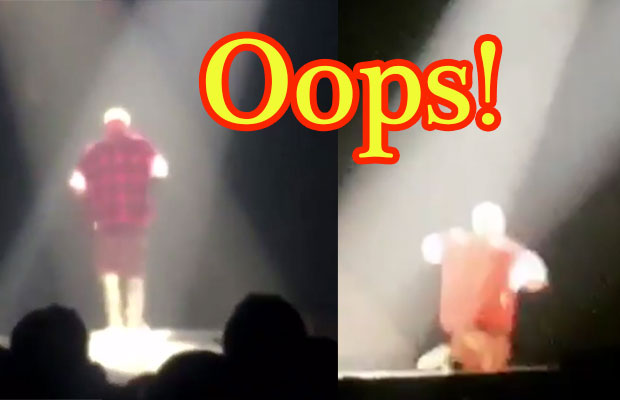 !-[tps_footer]We have been gigging over this news for quite sometime and we wonder if this will make you giggle as well. Well reportedly our super sensitive Justin Bieber recently was at the brink of disappearance. Still wondering?

It was during a concert in Saskatoon, Canada on Thursday when Justin adjusted his pants, walked a few steps and disappeared somewhere with a loud “thump”! Both Justin and his fans got a tiny heat attack. He soon recovered, and re-gained his composure. Although this was a matter of seconds, the fans did not fail to take the video of his downrightly funny fall and post it on Instagram and Twitter! Though it is unknown if he underwent any injuries.

Whoops…? How did you not see the giant hole in the floor @justinbieber ??

NOO THE FALL IS WORSE FROM THIS ANGLE ? how were you okay?? @justinbieber pic.twitter.com/oi8PBfKI6H

“Good thing I’m like a cat and landed on my feet,” the 22-year-old Canadian singer told the crowd. “That scared the f–k outta me.”

Incidentally, that one was one of the several holes that Bieber and his backup dancers use to rise up from during the show, CBC reported.

Haha, now that was something! What do you guys think ?[/tps_footer]