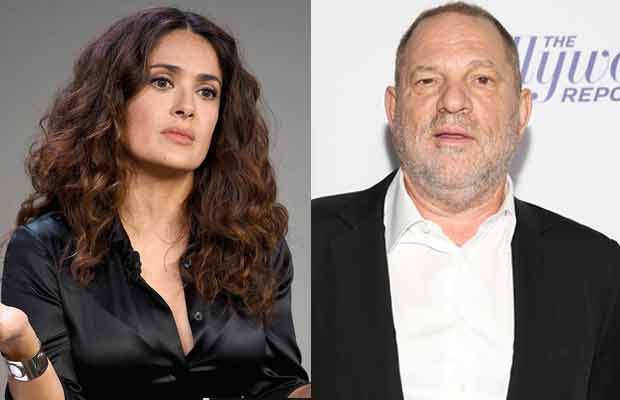 In an article actress, Salma Hayek writes about her terrifying experience with Harvey Weinstein.

Exploits of Hollywood film producer Harvey Weinstein just do not seem end. As his exploits came to light, a string of women started coming forward with their stories. Gwyneth Paltrow, Angelina Jolie, Lena Headey, Ramola Garai, Minka Kelly, Rose McGowan, Lupita Nyong’o are among 81 actresses, models, directors, producers and employees that have had encounters with Weinstein. One more famous actress has joined the ranks. Salma Hayek has come forward and shared her bone-chilling ‘experience’ with Weinstein.

Salma wrote about the events that led to her saying ‘no’ to the Hollywood producer in an article in the New York Times titled as “Harvey Weinstein Is My Monster Too”.

Salma wrote according to her there was nothing that the Hollywood mogul hated more than the word— no. Constantly hearing Salma’s refusal to complete his demands one day Weinstein told her, ‘‘I will kill you, don’t think I can’t.”

The actress added in the producer’s eyes she was just a thing, just a body to be violated. She also wrote how the producer ‘insisted’ that she should perform more intimate scenes and show more skin in the 2002 critically acclaimed film ‘Frida’.

She continued, “My mind understood that I had to do it, but my body wouldn’t stop crying and convulsing. At that point, I started throwing up while a set frozen still waited to shoot. I had to take a tranquilizer, which eventually stopped the crying but made the vomiting worse. As you can imagine, this was not s*xy, but it was the only way I could get through the scene.”

After the eye-opening article, Weinstein has issued a statement that he never forced Slama Hayek to perform intimate scenes in ‘Frida’.

Harvey Weinstein’s spokesperson wrote, “Mr. Weinstein does not recall pressuring Salma to do a gratuitous s*x scene with a female costar and he was not there for the filming. However, that was part of the story, as Frida Kahlo was bis*xual and the more significant s*x scene in the movie was choreographed by Ms. Hayek with Geoffrey Rush.”

The statement further reads, ”All of the s*xual allegations as portrayed by Salma are not accurate and others who witnessed the events have a different account of what transpired.”