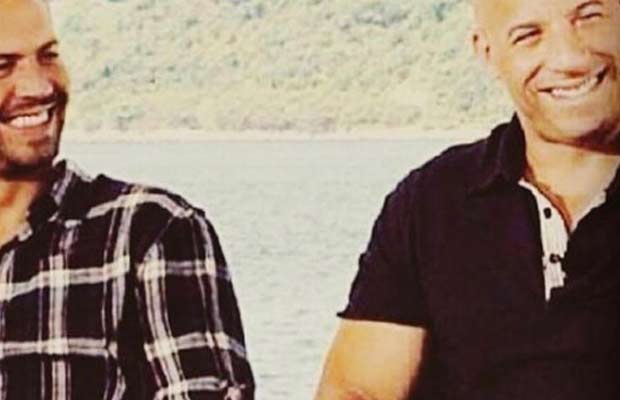 [tps_footer]Vin Diesel has been a major social media talk after he did this small act of gratitude towards his friend and ex-co-star Paul Walker. Also, he got pretty emotional about filming Fast & Furious 8 without Paul, but he referred to a picture on Instagram and said that Paul Walker would be proud. Aww!

So let’s see, what caught our attention this time.

Things got foggy and teary after Vin Diesel recently posted a picture of him and his baby daughter Pauline, 1 and…wait for it…Paul Walker! Yes. Paul Walker’s picture was photoshopped in the sky.  But the doctored image was only half of what followed.

“Always….”  Read the caption of the picture which clearly stated that Paul is, and always will be looking over Vin and his family. It is beyond question that Paul Walker has definitely touched a lot of lives, especially Vin’s. Well it has been an incredible journey you see! Six series of Fast & Furious together.

Such was Paul’s effect on Vin’s life that out of gratitude and remembrance, he even named his third and youngest child, daughter Pauline. “[Naming my daughter Pauline] felt like … a way to keep his memory a part of my family and a part of my world,” Vin revealed on the TODAY show last year. Really touchy!

He also said that he felt the presence of Paul while Pauline breathed her first into the world. “He was in the room,” he said. “There’s no other person that I was thinking about as I was cutting this umbilical cord. I just … knew he was there.” We have absolutely no words for this man.

Many of the crew members who have worked on several of the past Fast films are here again to help us make something special. One of them at the end of the week came up to me and said wow what we are capturing on film is excellent… And then looked at me and said Paul would be proud. #wemakethemwithourhearts

For the ones wondering, Paul Walker met with a tragic death in a single-vehicle collision on November 30, 2013, alongside his friend, Roger Rodas. He left behind one child, daughter Meadow, currently 17. We love you both and we miss you Paul. Fast & Furious won’t be the same without you.