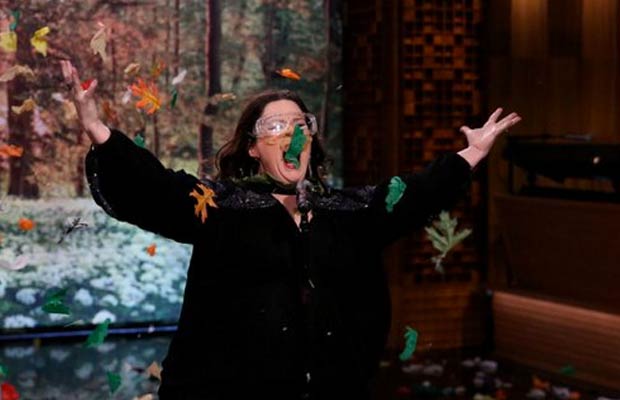 [tps_footer]Brace yourselves because you are in for a laughter ride!

If you follow Jimmy Fallon‘s show closely then you’d know that he has a segment called ‘Lip Sync Battle’ from the TV show with same has been made. This segment is where Jimmy challenges the guests to battle it out lip syncing their favourite songs.

As usual, Jimmy decided to kick things off with the song ‘Brand New Key’ by Melanie. Did he do justice to the song? I bet he performed the song with such an ease. He also demonstrated how to roller skate through the song which was funny. Then came Melissa‘s turn to start her game. She wore a baseball cap and upped her game with the DMX’s song ‘X Gonna Give It to Ya’. Not only she performed well, she showed some great dancing moves and her rap skills. Jimmy once again, made every laugh with his interpretation of Zayn Malik‘s song ‘Pillow Talk’. And yes, it involved pillow.

Melissa, later, went all out to fight back and this time with Disney’s Pocahontas song. The performance included clear glasses, a ton of glitter, fan, and some props. Jimmy couldn’t stop laughing seeing Melissa‘s hilarious performance. Even audience gave her a standing ovation.