Their kind of romance is rare and endearing. Tollywood actors, Naga Chaitanya and Samantha Ruth Prabhu who have been dating steadily for 8 years. They have finally made it official. Chaitanya and Samantha, whose fans popularly refer to them as ‘ChaiSam’, were engaged in a small, private ceremony in Hyderabad on Sunday.

The news was also confirmed by the superstar Akkineni Nagarjuna, Chaitanya’s father. He took to Twitter to share his joy with his fans and followers. “”#Chaisam It’s official now. My mother is my daughter now. Couldn’t be happier!!” Nagarjuna tweeted.

For all the uninitiated, he is actually making a reference to a role from the grand Akkineni movie, Manam, where Samantha was Naga’s mother in a different life! The film had three generations of the legendary ANR family.

Even Chai’s younger brother took to Twitter to share his happiness: “My brother and my new sister ! I’m the happiest thammudu in the world. Love you guys !”

The couple, who make a handsome pair, took social media by storm with their engagement pictures and videos. Samantha wore a delicately worked gold and white saree specially designed by Kresha Bajaj. While Chaitanya opted for a formal suit.

It seemed like their ring ceremony was a shot straight out of their first film together, Ye Maaya Chesave. Here is a video from the ceremony where the lovely couple is exchanging rings and Chai leans on and kisses his to-be-wife’s forehead. You cannot contain the aww.

Congratulations to the gorgeous couple and families!

And my little cousin @chay_akkineni is all grown up!! Congratulations brother!! And @Samanthaprabhu2 welcome to the family!! ❤️ pic.twitter.com/kLC7gRxOwi

#chaisam engagement video.. congrats again and all the best to both of you guys ? pic.twitter.com/qiYvaDEi4W 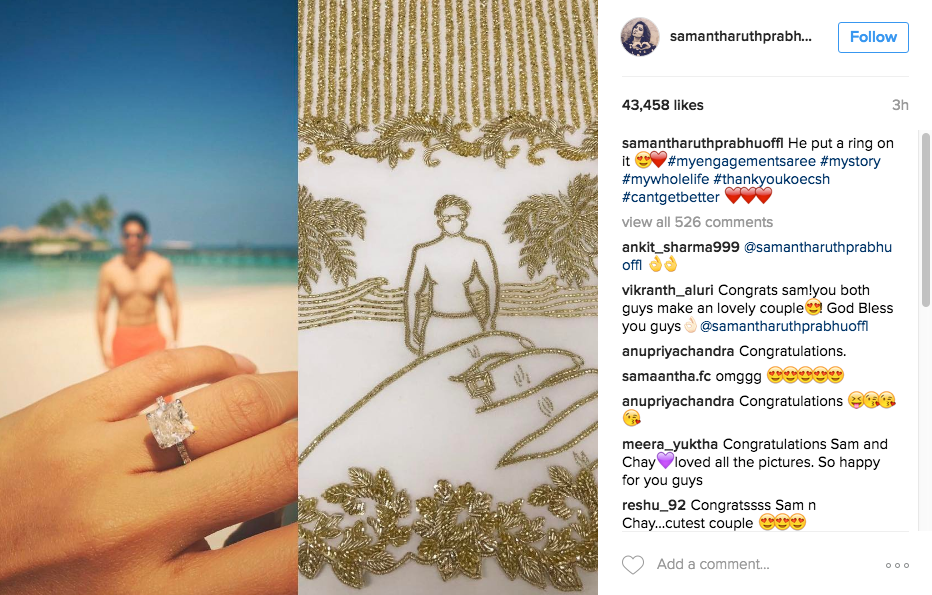