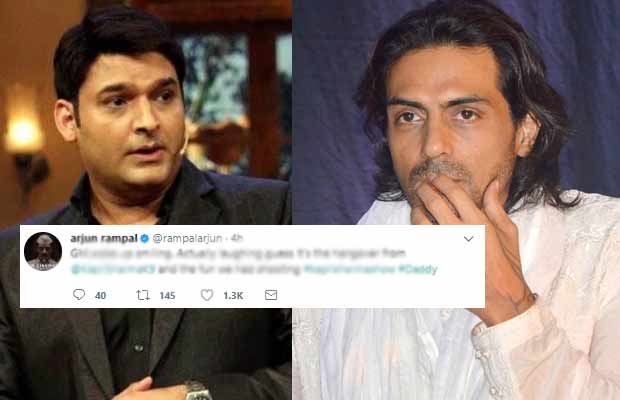 Comedian Kapil Sharma has cancelled several shoots or delayed them for his failing health in the past. The show is falling after Kapil Sharma had a fight mid-flight with co-star Sunil Grover. It caused a lot of controversies which led to the TRP’s of the show to drop even more after Sunil Grover quit.

Recently the comedian was said to have cancelled the episode with yet another Bollywood actor Arjun Rampal. Other actors like Shah Rukh Khan and Arjun Kapoor who were coming to promote their respective movies had to face similar reasons.

Reports suggested that Arjun Rampal and co-star Aishwarya Rajesh had to wait for hours for Kapil Sharma who never showed up owing to ill health.

But the rumours were shut down by the actor himself who clarified via twitter that the shooting had taken place after all.

Actor Arjun Rampal was the sweetest guy when he shared that the show was fun and the shooting was worth it. The actor tweeted, “GM, woke up smiling. Actually laughing guess it’s the hangover from @KapilSharmaK9 and the fun we had shooting #kapilsharmashow #Daddy”

GM,woke up smiling. Actually laughing guess it’s the hangover from @KapilSharmaK9 and the fun we had shooting #kapilsharmashow #Daddy

Thanks for the wonderful evening sir .. we all enjoyed u n gang .. all the very best for #daddy n u also mummy @aishu_dil #daddyontkss

The actress replied back with a tweet thanking Kapil Sharma for the wonderful evening and for making them all laugh so much.

thank u Kapil 4 making us nonstop laugh ? an gr8 show

Kapil Sharma has been in the news lately for the dropping TRP’s of his show ‘The Kapil Sharma Show’. It was rumoured to be going off air but was renewed for another season at the last minute by the channel.

Arjun Rampal’s movie ‘Daddy’ will be releasing on September 8th. It is a political crime thriller about the underworld life of Mumbai and is produced by Arjun Rampal.