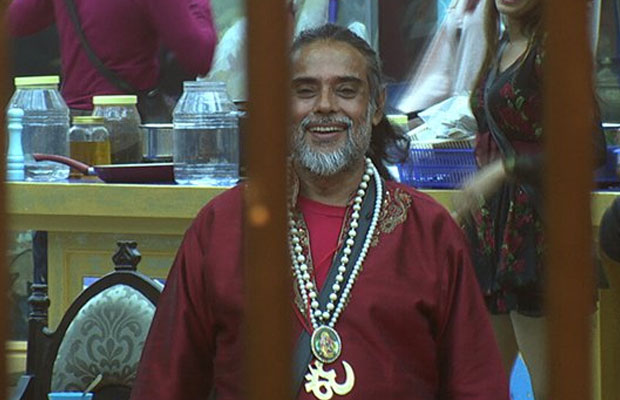 Tonight’s episode of  Bigg Boss 10 started on an argument between Om Swami and housemates after he tells Priyanka Jagga and other housemates that how everyone wants them to be out of the house. Later, Priyanka Jagga tells Manu that he should play his game alone and that why get close to Mona. She also tells his that why he needs to support to Mona and that even his fiancé is upset with the same. Manu goes and shares the same with Mona. Priyanka has tried to put a fire between Manu, Manveer, and Mona but the trio was no mood to pay heed.

Om Swami eats non-veg again in the lunch and when housemates ask him if he is eating non-veg, Swami tells that he has started eating to it after he mistakenly ate previous day. Manveer also tells Om Swami to stop doing drama and remove all the god things he is wearing in his neck. Later, Lopa gives a makeover to Om Swami, leaving housemates burst into laughter. Manveer, Manu, and others make fun of Swami as Lopa chops his hair and beard.  By the end of the day, housemates make fun of Elena and enjoy a good time in the garden area.

Elena keeps the whole house entertained as she lifts Jason on her back, leaving everyone in a shock. The housemates wondered how did she do that and applauded her for her strength

LATER, Rohan asks Om Swami if he has stole cycles outside as Sahil Anand revealed about the same to him. To which Om Swami replies saying that why would he steal cycles when he himself does not use it.

Bigg Boss asked all the wild card entrants to choose the target they would want to replace in the house from the 5 already nominated contestants (Bani, Rahul, Gaurav, Manveer, and Nitibha).  Sahil challenges Rahul, whereas Priyanka challenges Bani. On the other hand, Elena challenged Nitibha and Jason challenged Gaurav. Manveer gets safe directly as nobody chose him as a partner for the nomination task.

Bigg Boss introduced a challenging task between them and the one who loses from each pair will get directly nominated. All the 8 contestants had to sit inside a dome with their pair. The dome was too small to let 2 people fit in with comfort and it was time for some patience check. Priyanka and Bani get comfortable with each other and have a good chat with each other inside the dome. Amid everything, one out of the two contestants was seen coming out of the dome. Eventually, Jason, Elena, Rahul and Bani got nominated after losing the challenge.

Surprising thing of the episode was when Manu and Manveer found a basket full of shampoo, conditioner, deodorant bottles and other households things from Om Swami’s luggage bag. They even call him “chor” and Om Swami replies them back saying that this is impossible and that he has not stolen anything. Well, not only inside, he is stealing things inside the house. This man is insane!

In tomorrow’s episode, you will witness a new catfight in the house with Priyanka Jagga and Monalisa.