Not only inside Bigg Boss 10 house, but the fights and drama in real are happening outside the house too because of contestants Bani and Rohan Mehra. Recently in one of the episodes, Rohan Mehra and Bani got into a war of words that even left housemates shocked. While the two were fighting inside the house, it was another fight going outside too between Rohan‘s girlfriend Kanchi Singh and Bani’s best friend Gauahar Khan. The two got into a heated argument on twitter over Rohan and Bani’s fight inside Bigg Boss 10 house.

Gauahar tweeted and hashtagged her tweet with #RudeRohan, which did not go well with Kanchi Singh. Rohan’s girlfriend did not take it and hit out back saying, “Everyone knows whose rude n also who plays for THE TEAM #wesupportrohan @rohan4747 @GAUAHAR_KHAN.” 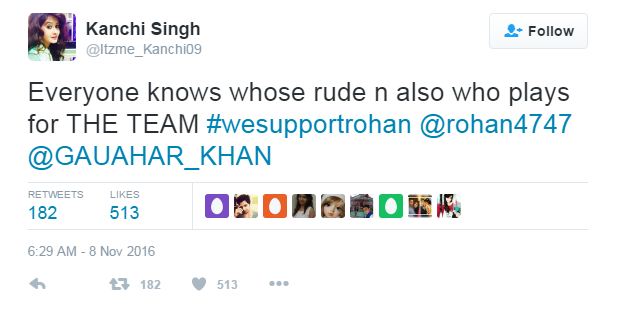 On the other hand, Kanchi Singh is cool enough over Rohan and Lokesh’s bonding in the Bigg Boss 10 house. Kanchi said that Lokesh and Rohan‘s bonding is pure and that she is not insecure of it at all. She also added saying that she feel Rohan is the strongest contestant on the show as being young amongst all, he is taking the stand and performing all the tasks.