Bigg Boss 10 winner Manveer Gurjar has landed up in a soup of controversies just a day after the grand finale. From getting a grand welcome to interviews and what not, Manveer was getting all the limelight but later, things turned out another way. First, his secret wedding video went viral and then his video of having an abusive conversation with his friends took the internet by storm. If that was not enough, Noida Police has lodged a FIR against Bigg Boss 10 winner Manveer Gurjar and his supporters for obstructing traffic and causing a ruckus outside the venue.

As per reports, Bigg Boss 10 winner Manveer Gurjar, who is currently in the limelight for all the wrong reasons, is now hospitalized. Yes, Manveer has been admitted to hospital due to high fever and is currently recovering. His picture from the hospital got viral soon after he was admitted. 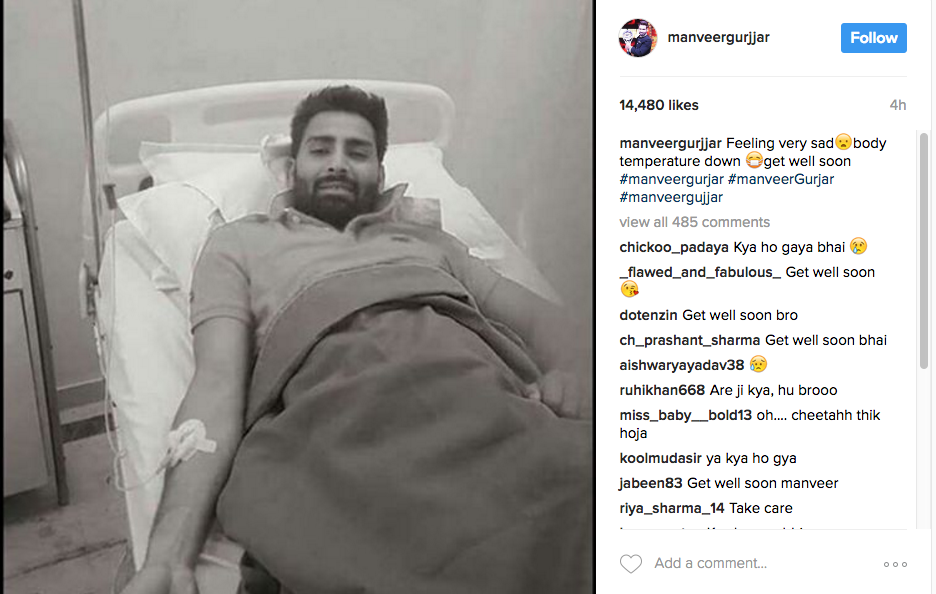 Well, Manveer Gurjar is losing his fan following and has also left his Bigg Boss 10 co-contestants in a shock. Nitibha Kaul, who was very close to Manveer, is quite upset after knowing about his secret wedding and having a three-year-old daughter. While Lopamudra Raut is quite in a shock knowing that how can someone hide his marital status and also questioned if Manveer is ashamed to reveal about his marriage.

While he has denied the authenticity of the claims, some of the relatives have come up with another side of the story that reveals he is married and that even makers of the show were aware of it.

When asked about his marriage and the photos that have gone viral, Manveer reacted saying, “I am not married. Shaadi jaisi cheez aise chhup nahi sakti. I have been in the Bigg Boss House since October. Ab tak kisi ne to issue raise kiya hi hota. This has just been done by someone for cheap publicity and nothing else.“

Well, only time will tell the truth behind all the rumours and allegations put on Manveer Gurjar!