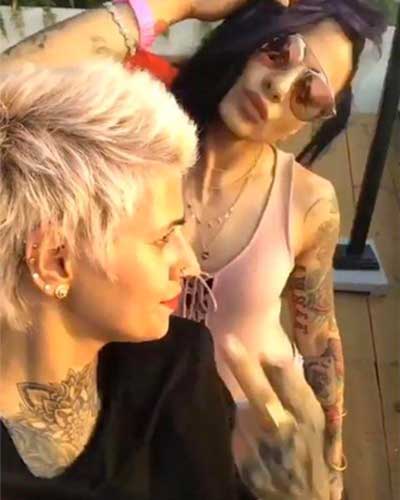 A recent post by the Bigg Boss 10 runner-up, Bani J on her Instagram handle has taken internet by storm. In the pictures posted by the VJ herself, she is apparently kissing the celebrity hair stylist Sapna Bhavnani.

Both of them have been contestants of the TV reality show Bigg Boss, but in different seasons. But the two of them appear to get along with each other really well.

The duo met for a music concert last evening (March 26, 2017), when they got these pictures clicked. They seem to be kissing each other. But when we look closely at the pictures we get to know that they aren’t really locking their lips.

Maybe it’s just a prank or a dare that the two of them got. But the pictures were enough to create the buzz around. They have gone viral on the internet. The VJ is already in a relationship with her boyfriend, Yuvraj Thakur. It will be interesting to know about his thoughts on the viral pics of her girlfriend.

Bani J was last seen in the TV reality show Bigg Boss 10, where she ended up being the first runner-up. Now the entertainer is all set for her debut in daily soaps. She is going to feature in Sony Television’s upcoming show, Porus where she will be portraying the role of Queen Olympias, Alexander The Great’s mother.

This role has been earlier played by Angelina Jolie in the Hollywood film Alexander.[/tps_footer]