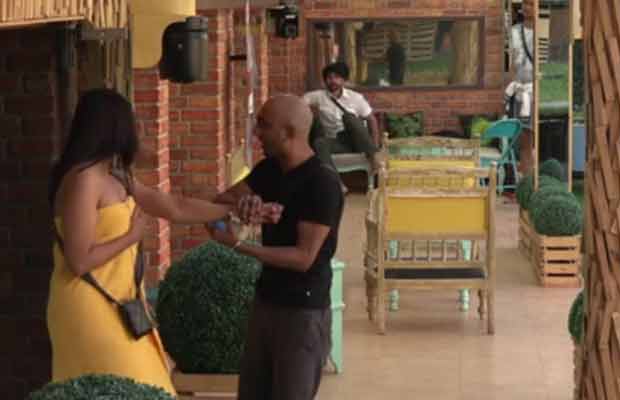 When Arshi Khan wore a towel in front of Hiten Tejwani and Vikas Gupta in Bigg Boss 11 house.

Bigg Boss 11 is one of the controversial seasons so far. Each day, housemates come up with new fights and drama. Sometimes, housemates forget that they are on national television and that there are hundreds of cameras around them. For instance, Bandgi Kalra and Puneesh Sharma got close to each other and even entered bathroom together in the midnight.

Well, some things are not aired on the television for better reasons. One such moment is of Akash Dadlani and Arshi Khan. In the unseen voot video, Akash Dadlani is seen putting Arshi Khan up for a challenge that she herself brought up. It involves a towel. What is this challenge?

Akash asked Arshi to remove her clothes and wrap the towel before giving her oil massage on the shoulder. However, Shilpa Shinde gets angry over it but despite that Arshi heads in the bathroom where she removes only the sleeves of her dress and wraps the towel.

She wraps the towel over her dress, this leaves Shilpa angry. Arshi repeatedly keeps saying that Shilpa will get angry. However, Akash tells her that who is Shilpa to decide everything for her. He also tells her that even Sunny Leone had done something such when she was in Bigg Boss.

After she wraps towel, Akash takes Arshi to the garden area. But Vikas Gupta and Hiten Tejwani send her inside. The two guys are heard talking that how these people can be so cheap on the national television.

Arshi Khan then goes back to the bathroom area and removes towel. Akash tells her that he was just testing her if she does it because Arshi herself got this challenge introduced.

Once they go back to the living area, Shilpa talks to Arshi over doing something very wrong. This leaves Akash angry and he gets into heated argument for commenting on everything.

Catch this unseen video on Voot.com!