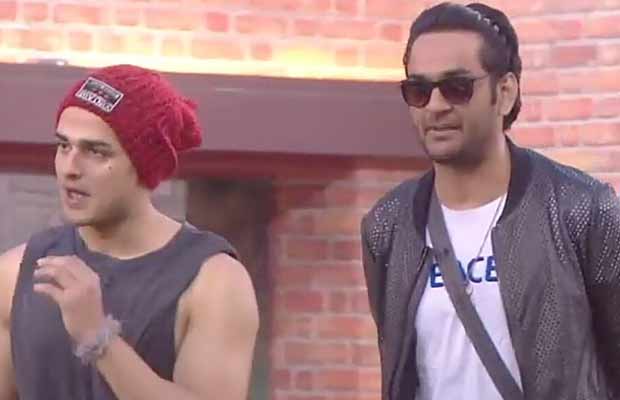 Bigg Boss 11 house might see a shocking fight between Priyank Sharma and Vikas Gupta. Here’s why!

Tonight’s episode of Bigg Boss 11 will see housemates gearing up for the new luxury budget task. For the luxury budget task, the housemates have been divided into two teams. Arshi Khan, Vikas Gupta, Shilpa Shinde and Luv Tyagi are the workers of the ‘BB Lab” while Hina Khan, Priyank Sharma, Akash Dadlani and Hiten Tejwani are the robots.

The job of the workers is to bring out one emotion out of the robots. While getting out angry emotion, Vikas Gupta takes the right revenge and advantage of the situation. He goes to every extent to make Akash angry by calling him ugly and what not. He also raises the issue of kissing Shilpa Shinde.

Later he moves on to Priyank Sharma and speaks his mind out like never before. He even insulted Priyank Sharma by calling him worst person. Vikas Gupta also provokes him by bringing Divya Agarwal scene again. Vikas asks Priyank how can he talk about his se*uality with Hina Khan, and how does he know about it. He further calls him a traitor.

.@ipriyanksharmaa & @eyehinakhan are under @lostboy54's scanner in the 'BB Lab' Luxury Budget Task! Watch the drama unfold tonight at 10:30 PM only on #BB11 pic.twitter.com/5XzKQ53XZL

Watch the unseen video of the same shared on twitter: